The Cursed Ones by Nancy Holder & Debbie Viguié 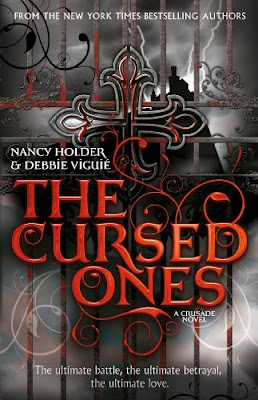 Release Day: February 3rd, 2011
Publisher: Simon & Schuster Children Books
Pages: 480pgs
The Story
---
The ultimate battle. The ultimate love.
---
For the past two years, Jenn has lived and trained at Spain's Sacred Heart Academy Against the Cursed Ones. She is among the few who have pledged to defend humanity or die trying. But the vampires are gaining power, and the battle has only just begun. Forced to return home after death takes a member of her family, Jenn discovers that San Francisco is now a vampire strong-hold.

As a lone hunter apart from her team, Jenn is isolated and at risk. She craves the company of her fighting partner, Antonio; his protection, his reassurance, his touch. But a relationship with Antonio comes with its own dangers, and the more they share of themselves, the more Jenn stands to lose. Then Jenn is betrayed by one who was once bound to protect her, causing her to doubt all she has held as true. To survive, Jenn must find the courage to trust herself - and her heart.
The Review
---

Lately I've been picky over vampire books - especially in the young adult book department - and it's not as if I'm tired of them (cause I still love vampires in fiction), it's just because not many authors write anything new about them. They sparkle, they turn to ash, they get staked, they become evil . . . there's nothing different. However, since I was already a fan of Nancy Holder and Debbie Viguie's previous WICKED books I was pleasantly surprised with THE CURSED ONES since both of the authors offered something a little bit different with vampires and vampire hunters. I guess, in a sense, it sort of had this historical edge to the setting . . . when actually it's set in our own futuristic world.
---

THE CURSED ONES takes readers into a believeable apocalyptic future, with vampires stepping out of the shadows and everyone who is human believes they are offering peace in their existence, when really . . . they want to take over the world. *rolls eyes* While this story seems cliche, but it's a good read and an interesting one at that. The main heroine, Jenn, is apart of a vampire hunting team in a small town in Spain. Within this team you have a vampire, a werewolf, a witch, and some annoying brats, and while the world building was very strong at times - including the religion and the history behind the story, but THE CURSED ONES has quite a lot of flaws. Some can be overlooked while others can't . . .
---

For example: When I read the summary of the book and saw a promised romance, I didn't see anything worthy of my attention. Jenn and another hunter named Antonio are in love, or so it suggests, but while I love Antonio a lot because he is the protective guy that all of us will love overtime . . . but like most guys, he has relationship and blood-lusting "issues" everytime he's around Jenn. And before you say anything . . . YES he's a vampire. Who isn't nowadays?
---

Another problem of mine was the length of the chapters - cause they are very long - and not to the mention the switching of MANY character points of view. Over the last few years, I've come to love the 3rd POV but it was a bit annoying in this case and it can get pretty confusing. None the less, the story is filled with some fun action-packed adventures and the authors wrote a great take on vampires and those who hunt them. The Hunters. But be warned . . . the story does take time to get into, but by the time you reach the second half of the novel, it does become quite engaging and leaves you guessing on what's going to happen next!
---
The Rating