The Sultan's Eyes by Kelly Gardiner 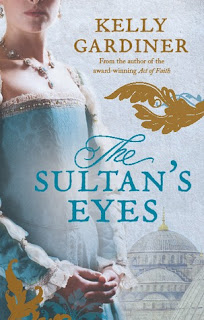 
The year is 1648 and life in Venice is serene for Isabella Hawkins and her friends Willem, Al-Qasim and Signora Contarini. Together they publish fine books like the controversial encyclopedia  The Sum of All Knowledge. When a new Inquisitor declares war on free speech however, they are forced to flee across the seas to the wondrous capital of the Ottoman Empire, Constantinople, which is ruled by the infamous Sultanate of the Women. Old friends and new, including the boy Sultan and his sister, welcome them to the world′s greatest city. But Isabella is soon entangled in poisonous palace intrigues, while her friends secretly play perilous games of their own.

A big thanks to HarperCollins Australia for sending me a review copy of this book!

I really enjoyed this book. But this isn't exactly a great surprise to me (like not at all) because I actually really enjoyed the first installment of the series, Act of Faith, from the previous year, so of course I would also end up enjoying this sequel as well.

Looking back, I think what I liked most about this particular installment was that it was a much bigger novel compared to the first book and that the characters themselves were no longer on the run anymore but rather trying to survive within a palace setting, which I really the idea of. Now I would like to give out more details about this book, but because of spoilers and with some people not having read the first book, I'm going to keep a low profile for now with this one, but needless to say I loved getting to know the main character, Isabella, some more in this book and learning what a great little philosopher she is slowly becoming. She is a very easy character to like, which again made this book very easy to like on a whole.

Overall, THE SULTAN'S EYES will definitely be enjoyable if you were like me and loving Kelly Gardiner's Act of Faith book. If you loved that book, then there's a big guarantee that you will also love its sequel as well.