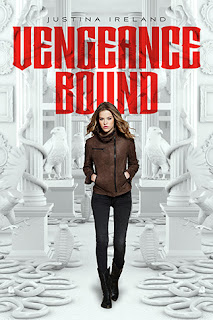 
Cory Graff is not alone in her head. Bound to a deal of desperation made when she was a child, Cory’s mind houses the Furies—the hawk and the serpent—lingering always, waiting for her to satisfy their bloodlust. After escaping the asylum where she was trapped for years, Cory knows how to keep the Furies quiet. By day, she lives a normal life, but by night, she tracks down targets the Furies send her way. And she brings down Justice upon them.Cory’s perfected her system of survival, but when she meets a mysterious boy named Niko at her new school, she can’t figure out how she feels about him. For the first time, the Furies are quiet in her head around a guy. But does this mean that Cory’s finally found someone who she can trust, or are there greater factors at work? As Cory’s mind becomes a battlefield, with the Furies fighting for control, Cory will have to put everything on the line to hold on to what she’s worked so hard to build.

While this title hasn't received too much hype lately, but with some fairly average and positive book reviews out there, I was still very much interest and very much looking forward to reading this book as it was said to be a young adult Dexter and since I pretty much adore that TV show I knew I was going to in for a real treat here, even by just looking at the gorgeous and creepy cover.

So did it live up to my expectations? Yes and no. I mean, after I finished this book, VENGEANCE BOUND may not have been exactly like the Dexter-esque feeling that I was originally looking for nor did it have a very solid storyline to necessarily wow me, but in the end and considering everything that happened, I still thought the book certainly had a great premise going for it and was executed well enough to satisfy me. However, if you're the kind of reader looking for a very heavy and interesting Greek mythology lesson of the Furies, then this may not be your type of book as the book mostly focuses on teenage drama and crimes of men rather than the mythologies themselves. But somehow - even though I, myself, was looking for more mythology from this book - the author still made it all work out in the end and I appreciated that. I was entertained and that's all that matters here.

In terms of the characters, while I didn't particularly feel anything for the supportive characters (unfortunately) but I really did come to love and enjoy reading about our main character, Cory, and I thought she resembled Dexter in many, many of her personality traits which is great and it is to be expected as she does take part in murders of men but ones that are mostly conducted by violent The Furies themselves. So whether or not you like her, Cory is most definitely not entirely innocent, however when you begin to learn more of her own back-story and how she came to working with and for the Furies, like Dexter, you eventually feel for Cory's whole situation and being able to struggle with her demons alongside her. She was definitely my favourite part of the book.

The only critical thing I have to say about this book (which maybe the reason why I rated this book down some more) is Cory's suppose 'love interest' and the ending itself. For the main love interest for Cory's, that being this dude named Niko, even though I do love a romance to happen in every book that I read but for some reason it just didn't work for me in this particular title.

Niko, I thought, was going to play a major part in this book or perhaps may have something to do with the Furies or something cool like that, but really I was just left disappointed when I found out his character was not necessarily needed. If at all. He was just too cliche and too boring for my taste. And too unnecessary. Yeah . . . Niko was an enigma himself and one where I couldn't quite figure out nor care less about really. I guess it was too insta-love for my liking and there was no connection with him at all sadly, so that was a bummer on my part. But as for the ending of the book itself, I liked it but I also didn't like it either. While it did certainly tie up most of the book's events and all of that, but I still felt like something more could or rather should have happened or it perhaps it was left opened on purpose in case of a sequel. I still don't know. So whether or not the author plans to do another book or not, on a whole, I thought most things were tied up as well as they could, even though some of the tied up events I agreed with more than others.

Overall, VENGEANCE BOUND was an enjoyable book and even with its faults I'm still looking forward to reading more from this author.