The Shadow Prince by Bree Despain 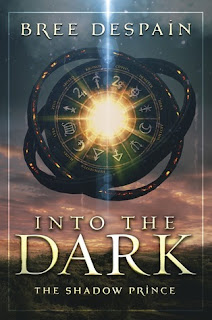 
Haden Lord, the disgraced prince of the Underrealm, has been sent to the mortal world to entice a girl into returning with him to the land of the dead. Posing as a student at Olympus Hills High—a haven for children of the rich and famous—Haden must single out the one girl rumored to be able to restore immortality to his race.Daphne Raines has dreams much bigger than her tiny southern Utah town, so when her rock star dad suddenly reappears, offering her full tuition to Olympus Hills High’s prestigious music program, she sees an opportunity to catch the break she needs to make it as a singer. But upon moving into her estranged father’s mansion in California, and attending her glamorous new school, Daphne soon realizes she isn’t the only student in Olympus who doesn’t quite belong.Haden and Daphne—destined for each other—know nothing of the true stakes their fated courtship entails. As war between the gods brews, the teenagers’ lives collide. But Daphne won’t be wooed easily and when it seems their prophesied link could happen, Haden realizes something he never intended—he’s fallen in love. Now to save themselves, Haden and Daphne must rewrite their destinies. But as their destinies change, so do the fates of both their worlds.

A big thanks to the publisher for sending me a review copy of this book!

For a while I've come to appreciate Bree Despain's work, especially with her very first series, The Dark Divine, which was always full of great action, romance and suspense, so of course I was looking forward to her new series here as it sounded and looked amazing as well. So you can only imagine how excited I was when the publisher accepted my request to read and review the book, because in the end of reading . . . I actually thought it was a pretty great book!

Since this is a 2014 title, I won't go into too much detail over THE SHADOW PRINCE, except I will say that many readers have a right to be excited about this particular book. Just think Starcrossed meets a tinge of The Goddess Test because both titles had certainly reminded me of this particular new book from Despain and I can't complain over that. So if you loved those two titles that I had mentioned, then be prepared for something along those lines with this book.

Like the author's previous titles, Bree Despain has always entertained me with her writing but the majority of my enjoyment - at least I think - came mostly from her mythology side of things. In this particular book it's the exact same way for me . . . the mythology the author writes is just so fascinating and I was pretty much hooked from the get-go. While I will admit that I did prefer the first half of the book than the second half of it, but in the end it's still a very great read that alternates between our two leading characters, Daphne and Haden, and contains a little bit of everything to entertain any sort of reader. Though girls . . . you definitely love this one more than the boys will because Haden is a pretty cool guy. Creepy sometimes and stubborn perhaps . . . but he's pretty cool and hot too.

Overall, THE SHADOW PRINCE is the perfect read for any reader looking for some cool mythology and while the book may not be totally original in some reader's eyes, but you'll definitely get past that once you meet the characters and learn more about the world the author has managed to put together. I would highly recommend it so check out next year!