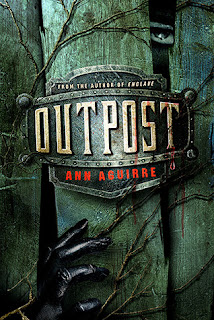 Down below, she was considered an adult. Now, topside in a town called Salvation, she’s a brat in need of training in the eyes of the townsfolk. She doesn't fit in with the other girls: Deuce only knows how to fight.

To make matters worse, her Hunter partner, Fade, keeps Deuce at a distance. Her feelings for Fade haven’t changed, but he seems not to want her around anymore. Confused and lonely, she starts looking for a way out.

Deuce signs up to serve in the summer patrols—those who make sure the planters can work the fields without danger. It should be routine, but things have been changing on the surface, just as they did below ground. The Freaks have grown smarter. They’re watching. Waiting. Planning. The monsters don’t intend to let Salvation survive, and it may take a girl like Deuce to turn back the tide.﻿
The Review


Don't get me wrong here. I really, really loved the first book in the series, but there was just something missing in this sequel. Something strong and something captivating. Or rather, I have no clue what changed in this sequel for me. But it's just unlike the first book that was packed with so much action, adventure, and so much character progression and development, I just felt as if the sequel just lost all of what made the first book, Enclave, so special and unique in its own genre, which is a real shame really because I was starting to really love this series.

OUTPOST was still interesting I suppose and left me with many questions with what is going to happen in the third and final book, but the characters and the storyline itself - at least for me - just fell completely flat. If anything, I probably blame it all on the teenage angst that constantly surrounded the characters which seemed rather unnecessary (especially between Deuce and her moody hunting partner/love interest Fade) and on the suppose 'love triangle' the main character has between two boys, even though it's quite obvious she has feelings more for one particular boy than the other. But yeah, I'm still uncertain to what I feel for this particular book, only that the storyline dragged on too many accounts and the characters in the end just didn't appeal to me this time round.

Overall, while OUTPOST was a major letdown, but I'm still hoping for the best in the third and final book and I'll be crossing my fingers that something changes my mind about this series, especially when I thought the first book had such a promising start.