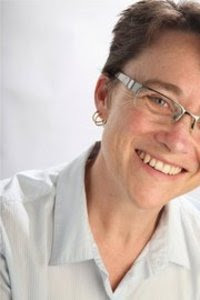 Kelly Gardiner is the Australian author of the recently released book called Act of Faith. If you haven't read my review on this supersweet read then you can read it here. Thanks to the amazing publicity team of HarperCollins - Lara who forwarded my questions - I was able to interview Kelly herself! Enjoy!

1. What inspired your novel Act of Faith?

Isabella. She just appeared. I started writing the shipwreck scene, and I didn't really know who Isabella was - only that she was a political refugee in a time of great turmoil, sometime in the late 17th century. It took a while for me to place her precisely in that moment in history. But I've always been fascinated by the history of the book, and its impact on the world and our communities, and everyone at present is talking about books as if they're doomed. So I thought about how the impact of the printing press seemed such a similar process to the rapid rollout of the web and other digital technologies, and how sudden changes in the way we access and use information are often accompanied by a backlash from authorities trying to shut it all down. (That makes it all sound much more conscious than it was. Really, it just kind of happened.)


2. How much research was needed to create your story?

Tons. Months and months of researching everything from what kind of buckles would be on her shoes (if any) to the great economic and political movements of the time. But I love it, so it's all fun. I am often heard to shout out loud in delight at discovering some new fascinating piece of information - of course, you only ever use a fraction of it in the text.

3. What do you hope your readers will experience in Act of Faith?

I'd just like them to enjoy the adventure, and hopefully see something of themselves in Isabella - and vice versa. 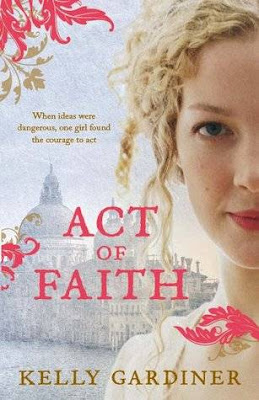 4. I loved Isabella's character. She's smart and definitely challenges the ideals of men being the dominant sex. What inspired her character?

There were quite a few extremely talented and well-educated women in England and Europe at the time - and of course in many other places such as China, Japan and the Ottoman Empire. And there were many women who worked hard for a living - in trades and professions, such as printing.

Also I get grumpy about historical fiction that makes women like Elizabeth I or Lady Jane Grey or Mary Queen of Scots - all formidable, multilingual, and highly trained intellects - out to be merely the puppets of male courtiers or fools for love. Isabella is my antidote.

Having said that, I didn't want her to come across as too perfect. She can be a bit of a snob at times, a bit precious, and she's quite rude to Willem at first. So one of the important things that happens is that the process of the printing - the physical act of book creation - grounds her and helps her understand a world from which she'd always been aloof.

5. Any advice to aspiring authors such as myself?

The first thing is to read - everything you can, but especially if you want to write genre read as much as you can in that style. Each genre has a formula or code that you have to know deep inside you before you can crack it. The second thing is to write whenever you can, even if it's stuff that nobody will ever read. Thirdly, don't get too worried about all the other bits - pitches to publishers and slush piles and all that. It's too easy for people to write more query letters than stories. Start anywhere. You don't have to know what happens next. Write your story. The story that only you can write. Then think about the rest. Oh, and turn off your web browser and phone.


6. That's a great answer. And lastly, Are you working on any other novels at the moment?

I'm thinking about the sequel to Act of Faith. The working title is The Sultan's Eye and it is set in Venice and Istanbul, with some familiar characters and a few new ones. It will be out in 2013. I'm still in the planning stages, but the contracts are signed!


I'm more advanced in work on an adult novel, based on the real life of the remarkable Mademoiselle de Maupin, someone whose adventures are so wild I couldn't make them up! She was a 17th century swordswoman and opera singer who dressed in men's clothes, and once duelled three men at the same time and beat them all. I've been working on that part-time for over a year now as part of my PhD and it'll be fair while before I'm finished, but she's excellent company.

I actually heard of Maupin! So very exciting! Wants it now! ;)

Thank you Kelly for letting me interview you!

Be sure to check out her book Act of Faith which is out NOW!

Be sure to add Act of Faith on goodreads
Posted by Erin W. at 12:00 AM