Data Runner by Sam A. Patel 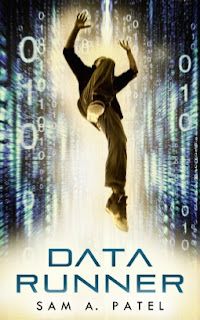 
In the not-too-distant future, in what was once the old City of New York, megacorporations have taken over everything. Now even the internet is owned, and the only way to transmit sensitive information is by a network of highly skilled couriers called “data runners” who run it over the sneakernet. It is a dangerous gig in a dirty world, but Jack Nill doesn't have much choice in the matter. A brilliant young math whiz and champion of parkour, Jack must become one of these data runners in order to get his father out of a major gambling debt. But when a mysterious stranger loads Jack’s chip with a cryptic cargo that everybody wants, he soon becomes the key figure in a conspiracy that could affect the entire North American Alliance. Now it’s all up to Jack. With the help of his best friend, Dexter, and a girl who runs under the name Red Tail, Jack will have to use all his skills to outrun the retrievers and uncover the truth before they catch him and clip him for good.

THE DATA RUNNER seemed right up my alley in books because I have a profound love of parkour (if you don't know what it is then look up immediately). It's exciting, fast, fun to look at and looks totally awesome when you watch videos of people running around ridiculously up and down walls and buildings . . . it's just awesome and so movie-like. So when this book came about, it sounded awesome and just what I needed right now. So in some certain aspects of the book, especially in the action and of parkour, it certainly delivered a fast-paced read. However, in terms of the storyline itself and what occurred within the book, while I loved the idea of it . . . it just wasn't as enjoyable as I wanted it to be but it was still a decent book.

While I liked the majority of the characters, particularly the main character, I still felt as if the book was too technical for me and perhaps a little bit too confusing. But with those small things aside, I loved how the author wrote the parkour action sequences because I think - in my own view - it's very hard writing about people running everywhere and anywhere so in that aspect I think the author did very well with that. He definitely captivated the art of the parkour in a fun way.

Overall, DATA RUNNER may not be for everyone, but if you love parkour like I do then you'll definitely come to enjoy this small fast-paced tale.