None of the Regular Rules by Erin Downing 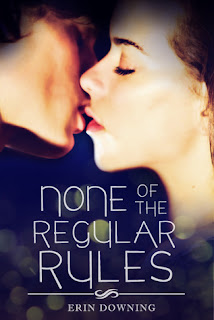 The weekend before the start of senior year, Sophie Erickson and her best friends, Ella and Grace, discover a handwritten list of dares tucked away in the glove compartment of Sophie’s beat-up old Toyota. But this isn't just any list; it’s a dead girl's bucket list.
Sophie's beloved aunt Suzy died as a teenager in a fatal fall, leaving Sophie with an overly cautious family, a few fading photographs, and a bucket of bolts that barely passes for a car. But now, Sophie has Suzy’s list of the things she wanted to do in her last year of high school. Sophie can't help but wonder: What would happen if she tried to fulfill Suzy’s last wishes, to live out the longed-for life of her aunt, her hero?
As Sophie and her friends attempt to knock off the things on Suzy's list of dares, love blossoms in unexpected places and Sophie begins to feel that her life is finally coming together...when in fact, everything is slowly unraveling around her. When the truth about a long-held family secret threatens to shatter everything she believed to be true, Sophie is forced to question everything she knew about the life and people she believed in, and ultimately herself.


I wasn't particularly 'enthralled' with NONE OF THE REGULAR RULES, but I still enjoyed the quickness of the book and the concept of it - mostly with how three best friends try to change their lives by completing a set of dares left by the main character's decreased aunt. I will admit the storyline itself was pretty predictable for the most part although I definitely thought it did delivered cute and heart-touching little messages about friendships, first love and ultimately growing up.

I may not have connected very well with the book itself but out of all the characters we meet, I only liked Sophie, the main character, because her other friends in the book were too self-absorbed for my own liking, and Johnny of course, who is Sophie's next door neighbour and boy crush. Ultimately I thought these two characters were the driving force of the book and were the main reason why I wanted to read the book more and more, so while I would've liked more romance to be apart of the story (cause it was the only thing I wanted to read about) but it was still a good, quick read that was worth reading.

Overall, NONE OF THE REGULAR RULES isn't exactly a very interesting book but for those who enjoy a cute, quick contemporary reads will definitely love this one too!