A Witch Alone by Ruth Warburton 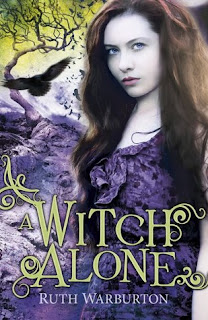 Where do you go when your heart has been ripped out?
For Anna there is only one answer; into her past, where the truth about her mother, her power, and her real identity lie hidden.But as Anna delves deeper into her history, she begins to fear that the truth about what set her mother running may be darker than she ever suspected. With the witches of the world on the brink of war, Seth gone, and her friend Abe wanting more from her than she can possibly give, Anna is in crisis.As the clouds around her gather, Anna is torn between friends, family and rival tribes of witches and – at the last – between love and magic.


I was already dying to get a copy of A WITCH ALONE, especially after what I read at the end of the second book. It was quite the cliffhanger to say the least. So, after reading and finishing the third and final installment and taking all of the crazy events in, I think the author did a splendid job in concluding this series and I'm sure plenty of readers will be very happy with it too!

Anna, Anna, Anna. I've always loved Anna as a main character and I really felt for her in this particular book too. My heart just broke for her because she was so broken herself and so defeated when her love, Seth, had left in the previous book, and even though she continuously allows herself to be swept up into many situations with very, very dangerous consequences in them, but considering everything she has been through it's easy to see that her head is not so clear at the moment, making it nearly impossible to make a proper decision now and then. But, despite all of that drama, Anna made me proud in this book because she always puts herself out there to protect those she loves and really what more can you ask for from a main heroine?

Seth on the other hand, and unfortunately, was the only downer of this book. He was probably the only reason why I didn't like this book as much as the first two. I don't know what it was about him and what changed, but the Seth I loved at the beginning of this series isn't the same Seth at the end of this book. So while I understand why he too is just as broken as Anna was and was in a foul mood most of the time, especially when he was reunited with Anna again, but he just kept blaming Anna for basically everything that was going on around him and he also made himself this lame pity party . . . so I didn't really want to be apart of it in any sense. Honestly Seth - what happened to you? I get you were over the whole Anna and witchy power side of things but seriously? What happened to you? Le sigh. Go back to your pity party.

Overall, I loved the fact that this book was much darker, twisty and had so many interesting tales to tell, so if you love something that is all of that then I suggest you quickly go and read A WITCH ALONE. It was a final book with a very satisfying conclusion on the most part and one I was was pretty happy about with all things considered! Well, despite Seth's pity party thing.