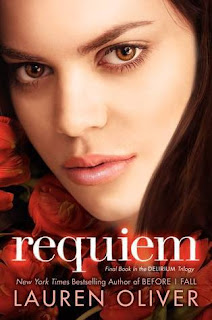 As her country erupts in open rebellion, Lena fights for the resistance and must make a heartbreaking choice between two loves.After saving Julian from a death sentence, Lena escapes with him and other members of the resistance. But as she embraces her love for Julian, a boy from her past returns and causes her to question everything. In the meantime, Lena's best friend, Hana, is engaged to Portland's young mayor and is living a safe, proscribed, loveless life. The story is told from both Lena and Hana's points of view.As Lena struggles to save the people she loves, everything comes to a head in this exciting finale to Lauren Oliver's epic trilogy. REQUIEM is a sophisticated, wide-ranging novel that explores the large issues of society, government, and resistance, and of course, there is romance.

After all we've been through in Lauren Oliver's first book Delirium and its sequel Pandemonium, I thought the author was going to deliver us this mind-blowing final conclusion to her YA series with REQUIEM and make her characters shine, not to mention make us go . . . whoa, now that's what I call a final book! But, from where I'm standing, which may not be a very popular opinion for the fans of this series, I was clearly wrong. In fact, I was wrong on all accounts. I mean, just when I started to love this book more and more, and just when the action flowed seamlessly throughout it, it just all went downhill from there. Sadly.

Now don't get me wrong here: I enjoyed the book. It was certainly an improvement compared to the two other books in the series. But once the book hit that middle mark for me and landed in its so-called 'final conclusion', everything I was preparing myself for - this giddy excitement and grand anticipation of it all - just left me feeling annoyed, confused, deflated and utterly disappointed.

But look on the bright side, I really loved Lena's perspective. I wished it was ALL in her perspective. She's a great character who has finally grown up to be her own person and she has quite a lot of stories to tell to keep you fascinated all the way through the book. Especially with her latest romantic dramas between her two boys, Julian and Alex. But really? Adding Hana's perspective into the mix? I just didn't see the point of it really. I literally skimmed her chapters because I couldn't get interested in her character. I couldn't of cared less about her because I just wanted Lena. Just Lena. And, speaking of Lena's character, honestly what happened with her, Julian and Alex? First Alex comes back (a slight spoiler from the sequel) and you're like 'YES!' and then once you read this book you're like, 'WHAT THE HELL IS WRONG WITH HIM?', and then you're like, 'I HATE HIM FOR BEING LIKE THIS!'. Then there's Julian who I love so much but then with him you're like, 'LENA STOP USING THIS PERFECT GUY!', and then by the time you're finished with the book you're left saying, 'WHY DID YOU INTRODUCE HIM IN THE FIRST PLACE?'. Le Sigh. I just don't get it and all I can say is . . . this book was not what I expected.

And to add onto this major downer of mine, I wasn't impressed by the ending either. I. Was. Not. Impressed. With. It. At. All. I mean, I literally threw the book across the room because after everything that happened to the characters and after all of the tough battles they fought through, this 'ending' just randomly hits us like a tidal wave. But wait - it was not a tidal wave, more like a passing cloud with no effect on us what-so-ever. It was absolutely terrible if I was being brutally honest here. It was so opened ended, boring and it was just like . . . nothing. Poof! Gone. Nada. No closure. No feelings. No freaking clue what-so-ever on what happened in the actual book. Honestly it felt more like a sequel cliffhanger rather than a final conclusion to a series. Argh. I don't know what to think really, other than its an editing error or something. Clearly it's not though because it's the end everyone is talking about and I'm really mad about it. I mean, was Hana's perspective too important to focus on rather than the ending itself? Was it because the book had to be a certain amount of pages that the ending had to be cut off so quickly? Man . . . I just don't know. Please explain it to me!

Overall, REQUIEM was nothing like the final book I was expecting it to be like. It had its highs for sure . . . but that ending and what happened in that ending alone . . . I'm just very, very disappointed. Lena go home. Hana run away somewhere. Alex just leave all over again. Julian . . . well I miss you terribly. Where are you, my friend who is taken for granted all the time? Yeah, this book was not what I wanted at all except that there were some Julian scenes . . . so two stars are definitely worth that!