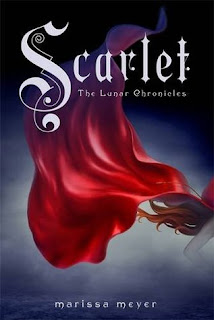 This is not the fairytale you remember.

But it’s one you won’t forget.
Scarlet Benoit’s grandmother is missing. The police have closed her case. The only person Scarlet can turn to is Wolf, a street fighter she does not trust, but they are drawn to each other.Meanwhile, in New Beijing, Cinder will become the Commonwealth’s most wanted fugitive – when she breaks out of prison to stay one step ahead of vicious Queen Levana.As Scarlet and Wolf expose one mystery, they encounter Cinder and a new one unravels. Together they must challenge the evil queen, who will stop at nothing to make Prince Kai her husband, her king, her prisoner . . .


I'm no going to lie: I did 'sort of' freak out when I heard there would be new characters introduced in SCARLET and telling (or rather continuing) the storyline of Cinder in the Lunar Chronicles sequel, but even though this sequel may not have been a very strong one at that compared to Cinder in terms of the progression of the storyline, but that still doesn't mean I didn't enjoy this book on a whole because I really, really did!

Initially I was so attached to the hip with Cinder, Kai and pretty much every other character from the previous book, and I just couldn't see any more characters coming in to replace my love for them. And yet, even to my own surprise, I actually appreciated the new characters in SCARLET - in fact I loved them - even more than the original characters. I even found Cinder and Kai's perspectives that are still in this book to be nothing but boring. I mean, I just wanted more of the 'other' character. I mean, I know, right? I'm such a little traitor here when it comes to Cinder and Kai. But quite honestly Scarlet, for one, our new main leading heroine, may have been completely different to Cinder, but she was SO awesome, completely kick-ass, and was every bit interesting throughout this one book alone. I just loved her character and personality more than Cinder because Scarlet was pretty much capable of anything. She had all these unknown possibilities. Now if only the next book was in her perspective . . . like all the time in her perspective! I can only wish because I can't get enough of her character!

But the boys! Oh my gosh those boys! Sure, I may have come to the sad conclusion of Kai being a completely douche in this sequel and a stupid idiot for his own - yet again - stupid actions, but I totally fell hard for Wolf and Thorne. For Thorne's character, I was completely, completely sold by him immediately. He is such a vibrant character to have behind this awesome backdrop and his humor is to die for! He was pretty hilarious in this book. But Wolf. Oh my god . . . WOLF! I knew Wolf was going to be this all mysterious and brooding guy, but don't get me started on him. I mean, where has he been all my life?! Him and Scarlet are just utter perfection, and honestly where has Marissa Meyer been hiding these highly-intense and chemistry-filled characters! Gosh. *fangal attack*

Overall, SCARLET was a great continuation of the Lunar Chronicles series and I'm looking forward to seeing how the next book plays out!