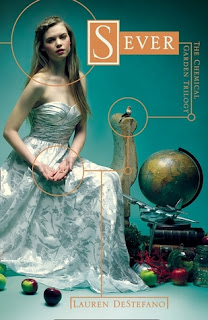 With the clock ticking until the virus takes its toll, Rhine is desperate for answers. After enduring Vaughn’s worst, Rhine finds an unlikely ally in his brother, an eccentric inventor named Reed. She takes refuge in his dilapidated house, though the people she left behind refuse to stay in the past. While Gabriel haunts Rhine’s memories, Cecily is determined to be at Rhine’s side, even if Linden’s feelings are still caught between them.Meanwhile, Rowan’s growing involvement in an underground resistance compels Rhine to reach him before he does something that cannot be undone. But what she discovers along the way has alarming implications for her future—and about the past her parents never had the chance to explain.In this breathtaking conclusion to Lauren DeStefano’s Chemical Garden trilogy, everything Rhine knows to be true will be irrevocably shattered.


After loving Lauren DeStefano's debut novel Wither and not so much loving its sequel Fever (which was a pretty big disappointment on my part), I have to say I was really anxious in reading the third and final installment of The Chemical Garden series, SEVER, because it had a lot of expectations to live up to as a final conclusion and it had to do a lot of work to do to bring back my love for this series as well.

So, by the time I finished this book, I still don't know what to actually think of it (I'm kind of torn between loving, liking, and not liking it so much) except that it was certainly a much . . . better sequel compared to Fever and really thankful for it too because I love this series from the get-go! I mean sure, there was a lot going on throughout this book in particular - some really crazy, crazy events that we don't even see coming at all - but in the end I was pleasantly happy with everything and how it all ended.

As for the characters who've had their ups and downs for me, they were great also in this book because every single one of them had finally shown a different side to them. One we haven't quite yet seen before. Rhine, our main heroine, was always someone I would consider to be the strongest character out of them all and yet in this particular book she is just fighting for her life all the way and no holding back now, and I loved seeing that side to her to come back (like what I saw in Wither) because I've really missed that kick-ass girl. I really did!

Linden, on the other hand, was someone you're going to either love or hate, but I've always had a soft spot for him considering he has well . . . no idea what is actually going on in his own home, with the world and what his father, Vaughn, has been up to behind his back. He has no idea at all. But despite his naive view of the world, Linden really takes charge in this book (even if it takes him forever to do so) and I think many readers will start to really like his character even if they weren't a big fan of his from the beginning of the series. Because he really does change towards the end of the book. Even Cecily -  the girl I've always hated in the series, had started to become a much strong character as well, but I still didn't like her (I just don't like her at all) but that's just me. Hehe.

But if I had one complaint here, it would have to be regarding 'my boy' Gabriel, the servant boy Rhine is in love with or so it would seem. Now I don't know about you guys who have actually read the book, but I was super disappointed with the no-show of Gabriel. Well, except when we finally SEE HIM in the last few chapters of the book (maybe the author forgot all about him . . . my poor, little perfect Gabriel!). But look, while I do understand that Gabriel is not exactly a central character in the book and is more of a supporting one I guess, but if he's a love interest of the main character . . . it's . . . I don't know . . . kind of expected that he would show up at least in the middle of the book and not towards the end of it. But ah well, at least I saw a little, little, little bit of him. Le sigh. I really missed my boy and I really needed more of him!

Overall, SEVER was a great conclusion to The Chemical Garden series and it really up-stepped its game compared to the sequel that I didn't have much love for. So yay for that! But, all in all, I think many readers will be pleasantly surprised by this book and will eat this one up in no time!