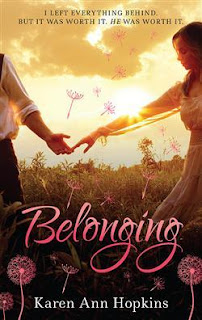 
I left everything I knew behind. But it was worth it. He was worth it. No one thought an ordinary girl like me would last two minutes living with the Amish, not even me. There are a lot more rules and a lot less freedom, and I miss my family and the life I once had. Worst of all, Noah and I aren't even allowed to see each other. Not until I've proven myself. If I can find a way to make it work, we'll be NOAH & ROSE together forever. But not everybody believes this is where I belong.

A big thanks to HarlequinTeen Australia for sending me a review copy of this book!

BELONGING is the second installment of the Temptation series, telling the delightful and perhaps unusual tale about two young teenagers falling in love, Noah and Rose. Noah is Amish, while Rose is just your regular teenage girl. At the end of the first book, Temptation, we saw Rose leaving her family far behind to join Noah in his Amish community and with hopes of being with Noah as it's the only way to really be with him in his community. But instead in this second book, we now find it's not as easy as it first appears to be for Rose and even then, when she arrives at Noah's home, she begins to see this struggle of what could be . . . the rest of her life.

Now from the first book, I didn't particularly like the decision Rose had made to join Noah's community. In fact, I didn't agree with it at all. Noah is definitely a fascinating guy and sweet perhaps, but he is so different to Rose in many ways, especially with his own personal views of relationships and how he has grown up as a child in his Amish community. Of course, I respected Rose's decision to be with him because she thought it was the right thing to do at the time and because she was in love with somebody, but as far as this book goes, I just didn't believe Rose made the right decision in the end and she didn't seem to fit into this community well enough (even if she tries so hard to do so) and I only wanted her to be back home where she belongs as no guy - no matter who he is or where he comes from - is worth all of this. Not even being taken away from a normal life you're so used to living. It just doesn't seem plausible for me. But in saying that, I still immensely enjoyed the book as we finally got more of perspective of how things work within an Amish community and it was very interesting that's for sure.

In terms of the characters, I still very much liked Rose (despite her still loving Noah) because she's someone who shouldn't be messed with. Some characters, particularly the elders of the Amish community and Noah's family, thought she would crack under the pressure of the Amish ways, but instead she stayed strong all the way through the book and did what she could to prove everyone wrong. And I loved that spunk about her. Plus on many occasions in this book she has many girl-power moments and I was totally rooting for her in every single moment of those. So let's just say Rose can kick some ass when she wants to!

As for Noah, as much as I love the guy, I still don't love him completely. He has many flaws (there's no point denying it) but I guess that has more to do with how he has been brought up - how the men in a relationship control the ways of the women who are nothing more than wives and bearers of children to them. I know they care about their wives immensely and such (I mean they married them, right?) but that's just my own understanding of their ways, which I didn't like so much but it's how they have been taught to be like and you can't argue about that because I, personally, don't understand their traditions. Still, for the majority of the book I found Noah was pretty controlling and was a bit of a hopeless case when his attention is focused on another girl (which I don't want to mention since I'm mad about Noah for doing that), and I don't know . . . he just made it very hard for me to like him because I felt he was pressuring Rose into marriage (like all the time), which they are, of course, not ready for at their age. But on the bright side of this, I like him as a character for the sake of Rose liking (and loving) him, so for now I will wait until the third book to make up my mind about his character. I just hope he is much more likable in these instances because he can be a sweet guy when he wants to be. But it's rare.

Overall, BELONGING was a great sequel with plenty of twists and turns to offer - some more unexpected than others. It may have its ups and downs from time to time, but when it comes down to it . . . it's a great tale and if you love a love story that is unique and so unlike any other you may have read before, than you're definitely going to love this book without a doubt!