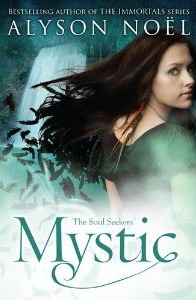 
After experiencing terrifying visions, Daire Santos goes to live with her grandmother in the dusty New Mexico town of Enchantment. There she discovers that she's a Soul Seeker - a person who can navigate between the living and the dead.Guided by her grandmother, Daire has learned how to harness her powers - just in time. Enchantment is controlled by the evil Richter family, who are determined to rule over the Lowerworld, Middleworld and Upperworld - upsetting the natural balance and causing chaos. Daire is the only person who can stop the Richters, but there's one problem: she's in love with Dace, whose twin brother Cade is a shape-shifter, out to steal Daire's powers.And both boys belong to the Richter clan. Can Daire fulfill her destiny without destroying her one true love?

A big thanks to Pan Macmillan for sending me a review copy of this book!

What more can I say? I loved this book and I love this series. Alyson Noel has a great knack for writing and I'm glad to discover this now because I wasn't a huge fan of her previous series, The Immortals. When I first picked up this series I was blown away by how much I enjoyed it and even though the sequel had let me down compared to that first amazing book that I had read, but I'm happy to admit the author has made me fall back in love with the series again and I can't wait to read more of it.

I can't point towards what exactly had made me love this book even more than the sequel, but if I had to guess it would probably be the the relationship between our main character and her love interest, that being Daire and Dace. I found, at least this time round, their relationship was much more focused and I felt their relationship was developing into something much more stronger which I always like to see with my characters, especially for a couple. It's something that feels more realistic, you know? And I like it more that way.

Another thing too, Daire is a really cool heroine. Sure she makes mistakes from time to time and knows sometimes her actions will have many consequences because of those 'certain' actions (this was proven in the previous sequel), but now Daire has become so confident within her own powers and has love to push her further to the limits than she has ever gone before, and she is now willing to fight for her loved ones no matter the costs. She's a fiery little one in this book . . . I can tell you that. Dace as well, Daire's boyfriend, was a stronger character too in this book. Plus it was really nice to see him not always being the golden 'good' brother all the time. It's nice to see the darkness inside of him grow (mostly because of his brother who causes him to act this certain way) and I thought it sort of balances him out as a character and I do like a bit of darkness in a boy from time to time hehe.

Overall, MYSTIC was a great third installment to the Soul Seekers series and offers so many things to keep you entertained (and shocked) until the very end of the book. So right now I'm patiently waiting around and looking forward to the fourth installment of the series because I NEED more of this story asap!