All I Ever Wanted by Kristan Higgins 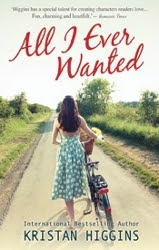 
For Callie Grey, turning thirty means coming to grips with the fact that her boss — and five-week fling — is way overdue with his marriage proposal. And way off track — because Mark has surprisingly announced his engagement to the company's new ‘Miss Perfect'. If that isn't bad enough, her mum decides to throw her a three-oh birthday bash in the family's funeral home.Bad goes to worse when Callie stirs up a crazy relationship with the town's not-so-warm and fuzzy veterinarian, Ian McFarland. So Ian is more comfortable with animals — he's also formal, orderly and just a bit tense… The ever-friendly, fun-loving and spontaneous Callie decides it's time for Ian to get a personality makeover. But darn, if he doesn't shock the heck out of her, she might actually fall for the town's unlikeliest eligible bachelor . . .


Sometimes I'm just not in the mood for contemporary adult fiction and sometimes I don't like reading mass-market romances at all because they are just too cliche or simply not interesting. But when a story is absolutely hilarious, has you in laughing stitches and offers a great range of things on a very comedic and romantic scale, that's when it hooks me straightaway and that's exactly what I got from this book. It was totally a real hoot for me!

First of all, I really loved the main character, Callie Grey, in this book. Whether there are moments were she is a bit dense with certain things (especially in the romance department) or is just saying something completely awkward but hilarous in her own head, I still managed to love her either way because she was a warm sort of character and hilarious in everything she does, say or do, so pretty much anyone with a great and awkward sense of humor gets total big points from me. And clearly Callie got many from me. While some of the other supporting characters were just okay for me - including that awful Mark who Callie loved, but everything was worth reading when you met and crossed paths with Ian McFarland, the new veterinarian in town and who Callie is particularly interested in all of a sudden. Oh Ian was what made this book so perfect, real and honest. Think another Mr. Darcy ladies but a veterinarian one instead of another rich dude! Trust me, Ian maybe a very shy guy and may have no clue what to do, at least as far as relationships go, but I fell for him hard. We just need more guys like Ian in our books . . . he was just an honest guy and I loved that about him even when he's moody from time to time. I just loved him to bits. Hehe.

Overall, ALL I EVER WANTED is such an awesome read and I've never read something so bloody hilarious before, especially in an adult novel, so in that aspect I totally fell for it and for Kristan Higgins's great humor dialogue. So if you want a good old laugh and some pretty awkward situations, this book would be absolutely perfect for you!