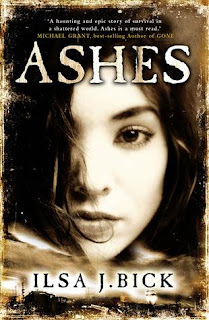 Release Date: 29 September, 2011
Publisher: Quercus
Pages: 352pgs
The Story
Alex has run away and is hiking through the wilderness with her dead parents' ashes, about to say goodbye to the life she no longer wants to live. But then the world suddenly changes. An electromagnetic pulse sweeps through the sky zapping every electronic device and killing the vast majority of adults. For those spared, it's a question of who can be trusted and who has changed . . . Everyone still alive has turned - some for the better (those who acquired a superhuman sense) while others for the worse (those who acquired a taste for human flesh).
Despite to find out what happened and to avoid the zombies that are on the hunt, Alex meets up with Tom - an Army veteran who escaped one war only to find something worse at home - and Ellie, a young girl whose grandfather was killed by the electromagnetic pulse. This improvised family will have to use every ounce of courage they have just to find food, shelter, while fighting off the 'Changed' and those desperate to stay alive.
A tense and involving adventure with shocks and sudden plot twists that will keep teen and adult readers gripped.
The Review
I would like to think I would survive the zombie apocalypse and who knows . . . maybe I would make it without being an undead's meal ticket . . . you know if the time ever comes. But here's the essential truth about me: I hate the woods. I can't start a fire. I don't own a gun. I don't particularly like the sight of real blood (not the movie kind though which hardly bothers me). And oh yeah - I've only come in contact with zombies through the tv screen. Other than that, I'm probably not as prepared for the zombies let alone the end of the world. Not as I should be. I mean, it's not like it's going to happen or anything . . . And here's another bit of truth about me: I absolutely, positively, utterly adore dystopian books and I love girls who finds themselves in a need to survive in dire circumstances and my god this author has clearly outdone herself.
ASHES was probably one of the best books - apart from the Hunger Games - that I've read in the dystopian genre and it stayed true to the dystopian ways of life. The feeling of hopelessness. The horrors and consequences of the survivors actions. And that flicker of hope that inspires the rest of the human population to move forward with their lives. And of course there are the zombies - how can I forget those kind of ex-human creatures of ours? Personally for me, I found Ilsa J. Bick has created a world in devastating isolation and yet she still manages to place a character into the centre of it all, and allow that character alone to find herself - find the courage she didn't know she had - along the way. That being the girl main character named Alex. I thought Alex was the ideal heroine to have in this type of storyline and the direction it was heading towards. She's smart, she knew how to take care of herself and others, and the most important one that shone out to me was how she handled horrible situations with so much strength and confidence. That is what dystopian needs. That is exactly what I ask for in a female heroine.
But that's not all I loved. The novel was divided into sections and it moved cinematically in an awesome-epic sort of way that got the reader excited and saying similar things like "OH MY GOD, I can't believe that just happened!". These shocking moments happened through the following events of: the electromagnetic pulse that hit and killed thousands, in the moments of the Change that slowly turned harmless humans into monsters, and in the moments where no one is sure whom to trust in the most unlikely band of strangers, and even in the moments of unexpected friendships that could change everything. Every bit of those elements that I mentioned above happened in the ASHES book and Bick wrote them with just as much confidence and percision as one would expect from a dystopian Stephen King-like novel. It was just awesome to read and I can't praise it enough!
With enough creepy and entertaining aspects to keep you there until the very end, ASHES is a fantastic beginning to a young adult series. Not to mention it shocked me when Bicks delivered a heart-pounding cliffhanger . . . leaving you wanting more and more. If you're a fan of the Hunger Games, Lord of the Flies or perhaps if you love a little zombie vs survivor action, then be sure to add ASHES to your to-read pile because it's going to unquestionably and undoubtably be the best thing you're ever going to read in the dystopian world of books.
The Rating