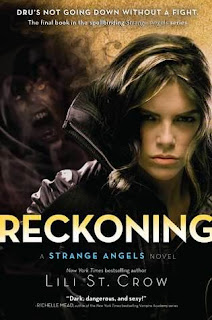 Release Date: 1st November, 2011
Publisher: Razorbill
Pages: 304pgs
The Story
The electric finale in New York Times bestselling author Lili St. Crow's Strange Angels series!
Nobody expected Dru Anderson to survive this long. Not Graves. Not Christophe. Not even Dru. She's battled killer zombies, jealous djamphirs, and bloodthirsty suckers straight out of her worst nightmares. But now that Dru has bloomed into a fullfledged svetocha - a rare, beautiful, and toxic to all vampires - the worst is yet to come. Because getting out alive is going to cost more than she's ever imagined. And in the end, is survival really worth the sacrifice?
Dru Anderson's not afraid of the dark.
But she should be.
The Review
To anyone who knows me and my reading habits (yes it's a habit), I've been a huge fan of Strange Angels series and of the author herself for quite some time. You can imagine to my surprise when I learned this book was to be the last of the series and you can imagine my constant pouting because of this realization. Having the idea of this series coming to an end with no more Dru's-badassness, no more Grave's-sometimes-fiery-and-sometimes-super-cute-temper, and having no more Christophe's-usual-protective-hotness . . . it's a sad world we live in. I knew the series had to end sometime in the future, after all the characters have been through a lot of rough patches in the past, but after reading this book I completely understand why so many of its readers were outraged by the ending. Well, I wasn't outraged per se, just more dissatisfied than I wanted to be. However, this little dissatisfaction hardly interfered with my liking of the fifth and final book.
For those fans of the Strange Angels series, you're already aware that Dru Anderson isn't your typical teenage girl. Over the last four books, she had a mother who'd died young, she was raised by her witchy grandmother whom wasn't exactly normal either, and she also had a father whom happened to hunt down the supernatural for a living. A job that ended up getting him turned into a zombie by a known enemy and was killed by Dru herself. Then of course, when Dru is being constantly surrounded by supernatural creatures, the true nature of Dru was soon revealed - and she's not exactly human either. Taking aboard of all these events in her life, Dru has been one of the strongest characters I know of in young adult fiction and one I've come to admire. She's not perfect, and that is certain, but she's badass to the bone when needed and we love her for it.
With familiar characters we know and love, the storyline remains intact with the same kickass action and plenty of banter to keep you on the edge of your seat. But like all readers of this series, you know Graves and Christophe - the two leading boys wanting to win Dru's heart and affection. And most of all her respect. But with so much happening in RECKONING, it's extremely hard to think about romance without the thought of being killed, but I'm one of those suckers (the un-vampiric kind of course) who loves some romance for our tomboy heroine, Dru Anderson. She needs some love you guys! There's no hidden confession when I say I was forever on Team Christophe. Don't get me wrong here, I love our Goth Boy Graves but Christophe was . . . my man. But whomever got with Dru wasn't the main concern for me since I like both of the boys. The main problem was . . . I was so frustrated with the boys themselves in this book than in the other installments. Graves soon became upfront with his feelings for Dru (finally!) but for whatever reason he still remained distant. There were reasons for this distance but damn him for confusing Dru and myself included. As for Christophe, as always, he was there for Dru (it's Christophe's way!) but while he's the same Christophe I love and adore, but there was one particular scene where he took Dru out for dinner and well . . . that scene was a little cheesy (with some things he said in particular) and maybe it's because he's in love for the very first time (not counting Dru's mother - yes, he was in love with her mother in another life) but whatever. I will discard that scene and continue to love him to bits no matter the cheese.
This now leads me to the question we're all dying for: Who wins? Who's the better man for Dru? I don't want to spoil it for you guys but all I can say is . . . . the ending was left in a way you - as a reader - can question and decide for yourself who wins. It angered me at first, this feeling of no real resolution in the romance department, but when putting some thought into it, the ending was actually quite necessary for this book series and I understand why Dru decided to do the things that needed to be done for her sake and for the sake of the guys, too. Still I was kinda disappointed. But you need to remember Dru has to nail the bad guy - the vampire king of all vampire kings - so she has plenty on her mind other than romance. So she's gets a bonus for having a clear thinking mind other than hot boys!
Overall, with a final farewell to this series, RECKONING continues with the same fast-paced sequences and pulsing-racing beats, leaving you readers with a bloody-fangtastic finale. While some things were left unsolved, readers will still enjoy this book and I highly recommend it. But oh Christophe . . . oh Graves . . . how you torment me so!
The Rating