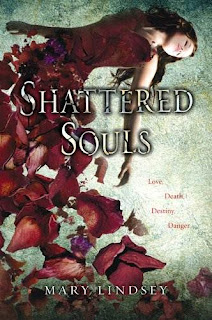 Release Date: 8th December, 2011
Publisher: Philomel/Penguin
Pages: 336pgs
The Story
A thrilling debut story of death, love, destiny and danger.
Lenzi hears voices and has visions - gravestones, flodds, a boy with a steel gray eyes. Her boyfriend, Zak, can't help, and everything keeps getting louder and more intense. Then Lenzi meets Alden, the boy from her dreams, who reveals that she's a reincarnated Speaker - someone who can talk to and help lost souls - and that he has been her Protector for centuries.
Now Lenzi must chose between her life with Zak and the life she is destined to lead with Alden. But time is running out: a malevolent spirit is out to destroy Lenzi, and he will kill her if she doesn't make a decision soon.
The Review
I wouldn't be the only one lying here when I say I was only attracted to this book because of its gorgeous cover (it's very gorgeous when seeing it in person) and of course with the small blurb mentionings of ghosts, reincarnation and some good old romance. What's not to like there? While all of these elements aren't exactly 'new' to the young adult book trend, but it was just enough to keep me interested in picking up this book and I knew what I was getting myself into. At least that's what I thought during the time of preordering the book. But despite the pretty cover and a decent-sounding storyline, and even the high star raving reviews that roam around the blogger world, the "oh-this-is-a-beautiful-cover-it's-got-to-be-good" saying can only goes so far and unfortunately I was quite disappointed. More than I'd thought I would be.
Within the first few lines of the book, everything was starting off great and Lenzi seemed like a real teenager whom I would eventually come to like. Her fear of the voices was something fun to read about but I desperately wanted a character where you, as a reader, wanted to know more about her. For her character, I didn't particularly care. Especially when her boyfriend enters the scene, then a stranger, and then having this big reveal of her being a reincarnation of a woman named Rose - someone known as the Speaker, who can talk and help hindred spirits find peace and resolution - you can only imagine there's a lot to take in. With the addition of slow pacing and boring dialogue, as you can see by what I've said above, it was really hard to like a book such as this one and its main characters, too. It was an interesting concept - I give it that - and I'm happy to admit that once the book flew past the halfway-mark, I eventually came to love the direction of the storyline but in regards to a whole book . . . it still doesn't mean it was the best. A real shame on the author's part because I saw a lot of potential.
I think one of the main problems of SHATTERED SOULS was the main characters and all their faults. They didn't connect with me whatsoever. Lenzi, the main heroine, started off great much like the storyline, but then she ended up being one of those fictional girls with silly insecurities and being oblivious to what's around her in her own reality, and I hate those girls. Then there's her musician boyfriend, Zak, whom was the most laughable thing ever. He was the kind of guy who wanted to get drunk, make out with his girlfriend on her father's grave while being drunk, and wanting to drive his girlfriend home while being drunk and well . . . let's just say he's the most depressing thing in the entire book. He was possessive. He was arrogrant. He was obsessed. He was jealous. He was a . . . complete jerk. Full stop. I saw nothing redeeming inside his character and what happened to him later in the book . . . well, he totally deserved it because I didn't like him one bit and he wasn't healthy AT ALL for Lenzi. Truly. Honestly. The only boy I slowly came to love was Alden, Lenzi's Speaker protector, and a fine gentleman he was. Sure he wasn't exactly the hottest thing around, what with keeping a lot of secrets and coming-and-going as he please, but at least he cared about Lenzi and treated her with some form of respect unlike someone we know. Still . . . the boys weren't exactly the greatest. However, what I did liked about it was the supporting characters, including Race and Maddi, whom you'll get to know a little bit more about when you read this book. You'll like them.
Overall, while looking over the constant teenage and spirit drama, SHATTERED SOULS wasn't exactly a 'boring' read but it was just something that was hard to finish at times. But not to worry readers, the book slowly redeems itself when you reach the middle section and get to the actual storyline and the ending itself. If you're a fan of romance, action, betrayal and loss, along with a little hint of ghostly-reincarnation-love, then you will definitely love this book without a question. It might not be for everyone - I admit that - but it's something you need to read for the sake of it and I can see it becoming a favourite read for younger readers.
The Rating