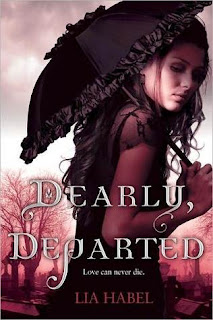 Release Date: 18th October, 2011
Publisher: Random House
Pages: 480pgs
The Story
Love can never die.
Love conquers all, so they say. But can Cupid's arrow pierce the hearts of the living and the dead - or rather, the undead? Can a proper young Victorian lady find true love in the arms of a dashing zombie?
The year is 2195. The place is New Victoria - a high-tech nation modeled on the manners, mores, and fashions of an antique era. A teenager in high society, Nora Dearly is far more interested in military history and her country's political unrest than in tea parties and debutante balls. But after her beloved parents die, Nora is left at the mercy of her domineering aunt, a social-climbing spendthrift who has squandered the family fortune, and now plans to marry her niece off for money. For Nora, no fate could be more horrible - until she's nearly kidnapped by an army of walking corpses.
But fate is just getting started with Nora. Catapulted from her world of drawing-room civility, she's suddenly gunning down . . .
The Review
I enjoyed this book. Really, I did. DEARLY DEPARTED has everything you want in a steampunk and a Victorian-like world filled with plenty of action, adventure, zombies and some good old-fashion blood and gore to steer the story in the right direction. And you will love it for those elements that I wholeheartedly mentioned.
However, you'd think having a fantastic set of characters would persuade you further to love the story for more than it is and you would begin to see the clearer picture - why so many readers loved this book and had such high praises for it. Now here's the thing . . . I love the book cover. It's a girl dressed in Victorian clothing. Win. It's a girl holding a parasol. Win win. And it's pretty in its pinkness. Yet another win. Like I said, I loved it! Initially that's what drew me in. But despite its pretty-as-a-picture cover, while I liked the zombies and the steampunk genre woven with the undead, but for me the book was quite disappointing. Especially when it came to the slow-pacing of the book.
The major MAJOR problem was the amount of perspectives. I could handle Nora and Bram's perspectives - the two main protagonists of the story - because I actually liked their characters and they served some purpose, but I couldn't at all handle the rest of the perspectives presented to me. First of all, there were way too many to remember and secondly I found myself skipping chapters and glancing over words without too much thought because some of the chapters were completely pointless and added no real depth to the storyline. And not to mention when you add so many perspectives to try and be creative, it tends to slow down the book's momentum which is a no-no through my eyes. Other than that critical factor, this book would've been much more enjoyable for me if the editor or even the author herself cut out a few of those chapters.
Now let's get talking about the characters . . . starting with Nora Dearly. Here's the thing: she's a great heroine to have in a story like this one. She's the complete opposite to what a young lady should act like and she doesn't care for the society of balls and marriages, but rather be passionate in the political and miltary history. Plus she's quite brash, has a sassy attitude and she can definitely have a fiery temper if something doesn't go her way or if people are hiding secrets from her. Even though she was 'sometimes' disagreeable (what with her making some decisions I didn't necessarily agree with and with her being a little over dramatic in her behaviour), but moving past that she was still a great girl you will come to love as the story progresses. Bram on the other hand, the undead soldier who unexpectedly ends up being a love interest to Nora, was probably my favourite character of them all. The moment you meet Bram and witness him rescuing Nora from a crowd of blood-thirsty and quite surprisingly energetic zombies . . . you know you have a definite keeper in the works. He's strong and fiercely brave, noble and affectionate, and had the right amount of zombie in him. Sure, he does comes across as a little too perfect for an undead zombie and a little TOO romantic to be real, but who cares because we all love a man in uniform, right?
The secondary characters were great as well. Nora's best friend. Bram's fine soldier crew. Even the villains of the story were really interesting to read about, too. While I couldn't connect with them as much as I did with Nora and Bram's characters, but it's just something that happens in books. You always have a tug of war of a love and hate relationship with them. Now apart from some flaws in the characters and the amount of POVs, the only real let down was the ending itself. I was a tiny bit disappointed in how things ended and I wanted a blow-me-away kind of ending to make me want and crave for the sequel. But I guess you can't have it all.
Look . . . on a whole I absolutely enjoyed the book. It may not have met my high expectations but there was still enough enjoyment to continue with the series. With an interesting world and an interesting concept of the 'new' breed of zombies, I'm sure a lot of young adult readers will devour this book in a second and will actually appreciate the much-love of the zombie gore inside it. I'm definitely looking forward to seeing what Lia Habel offers up next for our heroes and heroines! I'm sure it will be wicked!
The Rating