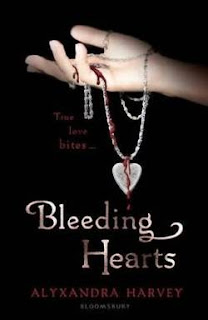 Release Date: 20th December, 2011
Publisher: Walker Books
Pages:289pgs
The Story
The Drakes and friends will be tested when an infestation of deadly vampires threatens Violet Hill.
Lucy's cousin Christabel has come to live in Violet Hill, and adjusting to the difference between life in a small mountain town and her home in the city is difficult enough. The strict curfew that Lucy's parents enforce is the worst part. Something really dangerous couldn't possibly happen in this tiny town.
But Christabel has noticed some mysterious happenings, and it seems like Lucy, her boyfriend Nicholas and his brother Connor are all in on a secret that Christabel doesn't understand - one that seems deadly serious. Although she won't admit it, Christabel would love to be in on any secret with Connor Drake. But when she is kidnapped by the ruthless Hel-Blar vampires, Christabel must cause more and more trouble in Violet Hill, Lucy and Connor finally fill Christabel in on all the undead drama. Together, they must find a way to stamp out the Hel-Blar for good.
The Review
BLEEDING HEARTS is the fourth installment of the Drake Chronicles. For everyone who knows me and my many different book tastes, I really enjoy this series because the author, Alyxandra Harvey, always offers a fun writing style and portrays the almost-realistic characters into a very intriguing paranormal storyline, ones that will always continue to entertain and surprise me!
Before I get into detail, please note if you haven't read the other books in the series you will probably will not understand the next part. But anway . . . Unlike the other three books in this young adult series, this time round the story revolves around brother number four, Connor, the geeky twin brother to Quinn (as seen in the previous books), whom changed his ways in book three. Probably out of all the brothers in the series, I would totally date and fall in love with Connor for the following reasons: 1) He's a geek, 2) He's a computer genius like me (at least I would like to think so hehe), 3) He quotes Star Wars often and I absolutely love him for it, and finally 4) He kicks major butt whenever possible. What can I say. . . except that he's definitely my kind of guy. Another character introduced to readers is a girl named Christabel. It's easy to connect with her character and with her bookacholic ways (yes we share that in common), however she was also the hardest character to connect with when it came to her personality traits and I don't know why exactly I couldn't like her as much . . . but ah well. It happens. On the plus side of her character, her head is forever stuck in a book (sounds familiar right?) and I could see how easy it was for her and Connor to become attracted to one another as they are very much alike, which was really good to read about. So a major plus on Harvey's side.
Since it's a short book, I won't give anything away. But with some interesting and unpredictable things happening throughout the novel, fans of the Drake Chronicles series will definitely enjoy this fourth installment. While it wasn't necessarily a favourite book of mine compared to the other three previous books, however I still can't wait to see what else Alyxandra Harvey brings up onto the table. I'm sure it will be awesome!
The Rating