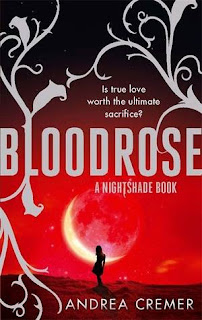 Publisher: ATOM
Pages: 416pgs
The Story
Is true love worth the ultimate sacrifice?
Calla has always welcomed war. But now that the final battle is upon her, there's more at stake than fighting. There's saving Ren, even if it incurs Shay's wrath. There's keeping Ansel safe, even if he's been branded a traitor. There's proving herself as the pack's alpha, facing unnamable horrors, and ridding the world of the Keepers' magic once and for all. And then there's deciding what to do when the war ends. If Calla makes it out alive, that is.
In the final installment of the Nightshade trilogy, New York Times bestselling author Andrea Cremer creates a novel with twists and turns that will keep you on the edge of your seat until its final pages. A dynamic end to this breathtaking trilogy.
The Review
A big thanks to Laura from Hachette for sending me a review copy of this book!
Despite the spoilers that have circulated the internet prior to me reading this book (yes thank you dear readers for that special early surprise of yours), I have to say the author, Andrea Cremer, had still totally surprised me in the way she handled her final conclusion to her bestselling Nightshade series. I mean, I loved the way she separated the book into different sections (water, fire, etc.) and how everything captured my attention from beginning to end just to find out what happens next, but dear Ms. Andrea Cremer why must you do what you just did in this book? Especially to me of all people. WHY? I knew it was coming, I knew there was a possibility of this certain "something" to happen to these lovely characters of ours . . . but man I felt kind of cheated even though I knew some of the spoilers before picking up and reading this book.
BLOODROSE picks up right after the previous book, Wolfsbane, and Cremer doesn't waste anytime whatsoever in continuing the fast-paced action sequences and the smexy sizzling sexual tension between several of the characters for all the right reasons, and I commend Cremer for always having the ability to entertain me. While that's good and all, but regarding characters I was a little concerned about them for the majority of the book and the choices they have made for others that I didn't necessarily agree with.
One of my concerns was the leading main heroine, Calla, herself. Throughout book one and two Calla had remained a tough-as-nuts strong and a fiercely independent young woman, however in this third installment I really disliked the way she juggled her personal relationships with her two potential love interests, Shay and Ren, and I often wondered why she did what she did with them. One moment she's kissing and staying inside Shay's room (I mean seriously come on), and the next she's switching her teams entirely and found almost kissing Ren. Which is basically torture for him . . . I understand why her heart is being split into two between two very different guys for two very different reasons, after all she has spent her entire childhood with Mr. Hottie-paws Ren and found new love with Shay that opened up all sorts of possibilities for her, but what I didn't understand was Calla's usual way of confusing the guy's minds . . . like becoming intimate with Shay right in front of Ren even though she has given the idea to Ren that he may still have a chance to be with her. Now that I didn't approve of and it was beyond cruel. But other than that small mishap on her part, Calla is much more focussed in this book than the others and even that much more determined . . . so for that I'm grateful for.
Look in some ways, BLOODROSE was a very well written book, with plenty of action and romance that kept you there reading on your bed in one sitting, and I love any book that leaves you anti-social for a few hours straight but . . . I disliked the ending. . . partially because I'm biased toward one of the main characters in particular and if you know my boy fictional teams well enough, you would know who I'm talking about here. While I do understand why Cremer decided to end the way she ended things in the third and final book, but I was more opened to an ending that was lovely and fitting for everyone, and unfortunately it wasn't what I wished for. The ending certainly concluded and tying a couple loose ends, but personally for me every single issue and circumstance was wrapped up far too easily and I wanted the main character, Calla, to have full closure and resolvement, and it was a pity it didn't turn out that way for all our sakes. A total bummer.
Without going into further detail, especially since I don't want to spoil things for those who haven't yet read this book or the series for that matter, overall I will give the author a fair shiny 4 golden stars despite my disappointments because Andrea Cremer did do a very good job with this novel and I was entertained on every high level possible. With a great continuation of the storyline (a little sad at times I admit), a fantastic and hilarious cast of characters, and with earth-shattering consequences, and heart-wrenching sacrifices that will pull some heartstrings of all ages, I highly recommend this book to readers of Unearthly and Vampire Academy! After all, this book was great because we finally get to see more of Ren . . . but oh . . . I wanted much more of him and less of nasty Shay (trust me there's a lot of rival alpha male pride going on between Ren and Shay and it's almost ridiculous at times)!
The Rating