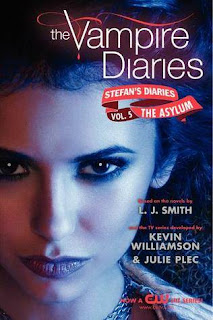 Release Date: 17th January, 2012
Publisher: HarperCollins
Pages: 288pgs
The Story
The hunters become the hunted . . .
Driven from their hometown of Mystic Falls, both Stefan Salvatore and his brother, Damon, arrived in Europe looking for a fresh start. But Samuel, a wealthy and cunning vampire, has other plans for them. First he ruined Stefan's peaceful existence and now he's framing Damon for the most gruesome murders London has ever seen.
United against their common enemy, Stefan and Damon are stunned when they realize that the source of Samuel's rage lies in their past - tied up with the woman who forever changed their lives. Haunted by the memory of Katherine, the brothers find that their uneasy alliance is tested. Can they overcome their rivalry to defeat Samuel before he exacts his final revenge?
The Review
A big thanks to HarperCollins Australia for sending me a review copy of this book!

Unlike the other original books in The Vampire Diaries series, these ones are not written by L.J. Smith herself. Yet again this matter is a real disappointment for me but I don't mind it one bit. And, another thing to take on board while reading these books . . . they are supposed to be based on the television series however they do not match the show's past time events. So for some readers, you may find these books disappointing or rather confusing at times, especially if you're a hardcore fan of the popular TV show as I am. But it was still a great book!
STEFAN DIARIES: THE ASYLUM picks up where volume #4 left off (please note I haven't read the previous book before this but you can still read this volume without reading the others), and now the handsome Salvatore brothers, Stefan and Damon, find themselves travelling across Europe and while the events of this series may be found hard to believe at times or that it doesn't quite match alongside the TV show's events, but either way I found this installment very entertaining and quick. Just the way I like it. But my only complaint would be Stefan (since Damon is always going to be Damon and fun as hell), as he's always brooding over Katherine and much like what you see in the TV show, I just really hope Stefan forgets all about Katherine - like she never existed - because there's only so much I can take of his brooding. Too many man woes. Other than that, this was a really cool addition to the series!
Overall, I really enjoyed this book but it's hard to talk about it without giving away a few spoilers - especially for a short read - so I'll just leave it at that. If you're looking for something light and entertaining, dark, edgy, and engrossing, or if you're like me and love watching the Vampire Diaries and reading the books in general (ones written by L.J. Smith or not), then this new installment of the STEFAN DIARIES: THE ASYLUM will definitely be your kind of read!
The Rating