A Beautiful Dark by Jocelyn Davies 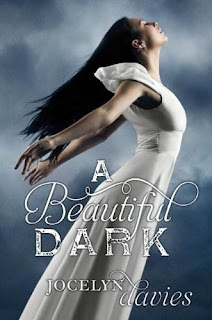 Release Date: 27th September, 2011
Publisher: HarperTeen
Pages: 320pgs
The Story
On the night of Skye's seventeenthb birthday, she meets two enigmatic strangers. Complete opposites - like fire and ice - Asher is dark and wild, while Devin is fair and aloof. Their sudden appearance sends Skye's life into a tailspin. She has no idea what they want, or why they seem to follow her every move - only that their presence coincides with a flurry of strange events. Soon she begins to doubt not just the identity of the two boys, but also the truth of her own past.
In the dead of a bitingly cold Colorado winter, Skye finds herself coming to terms with the impossible secret that threatens to shatter her world. Torn between Asher, who can't help falling for her, and Devin, who she can't stay away from, the consequences of Skye's choices will reach further than the three of them could ever imagine.
The Review
A BEAUTIFUL DARK came in a beautiful package - it had angels, a promised love triangle, a shrouded mystery and a haunting standout-ish cover that just made you want to buy it. To be honest with you here, I didn't have a lot of high expectations for this book because I'm no longer a fan of love triangles unless it's absolutely necessary for the storyline and unless it's built strongly, and also because it was about the whole dark vs light angel world, which tends to be unoriginal nowadays in young adult literature. Personally for me, I found this book had a great idea and it was entertaining to a certain point, but a lot of elements of the book could've been developed and/or improved on more.
On a whole I liked Skye as the main female heroine. I thought her relationship with her family and friends was written well and she seemed like the kind of girl who was sweet, innocent, easy to get along with and as a reader I could see how genuine she was without being too annoying. However, the major problem for this book was the guys, which will be a killer for 'us' fangirls wanting to pine for another fictional boy. So in this first installment of a trilogy, we have two guys vying for Skye's affections - the Ice King (best nickname I could come up with at this present time) Devin and the Fiery rebel-without-a-cause, Asher. Both guys certainly had their moments where I really liked them, but most of the time I just couldn't like like them. More so with Devin - I mean, REALLY? What was the point of you being there to disappoint us in the end? I think what contributed to me not liking them so much as potential love interests was for three reasons and three reasons only: 1) they disappeared all the time and I hate that horrible Houdini act, 2) they supposedly 'cared' about Skye but contradicted themselves with confusing actions that they'd undertaken, and 3) both guys really didn't know what they're doing and I think they need to get a proper job before they consider looking after a teenage girl whom is younger than they are. Anyway, that's all I'll say on the matter except that readers will find Asher far more appealing than Devin could ever be.
So as I raced through the book and putting aside my comments on the hottie guys, while the plot may have been predictable and too "let's go here - oh wait, let's go here" if you get my meaning, I still found the book a nice read to have on your book shelf. There was interesting mythology and while I've seen it occuring a lot in books . . . but Davies added her own personal touch to it that you'll love. And for readers who are concerned about the way I feel about the boys, you will still find Skye a great character and if I was in her situation (being bamboozled into thinking she has some destiny-hidden-power and being constantly surrounded by two hot guys who continue to mix up her feelings for God knows why) I too would be confused on how I feel.
Look, on a whole I would call A BEAUTIFUL DARK the 'Yo-Yo Factor Book' because you have your ups-and-down moments and it's up to reader to decide if it's their kind of book or not. Whether I like this one or not, I'm still on the fence. This, of course, isn't necessarily a bad thing because a series has enough time to step-up on its game and improve, which I hope will happen in the sequel considering the cliffhanger we were left on. A killer mind you.
Overall, I thought Jocelyn Davies presented an easy to follow script that picked up the pace soon after the halfway mark of the book. So I recommend A BEAUTIFUL DARK to readers who loved Unearthly, Hush Hush and Fallen. If you loved those titles, than you'll definitely love this one too!
The Rating