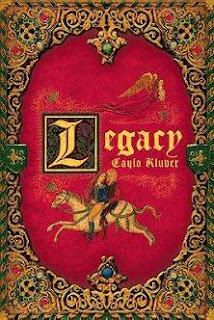 Release Date: 18th August, 2011
Publisher: AmazonEncore
Pages: 462pgs
The Story
Duty-bound to wed her father's choice in sucessor to the throne, Princess Alera of Hytanica believes that she is being forced into hte worst of all possible fates' a marriage to the arrogrant and hot-tempered suitor, Steldor. When a mysterious boy from enemy Cokyri appears bearing secrets and an entirely different view of what's appropriate behavior for a young lady, Alera learns that her private desires threaten to destroy the kingdom. When Narian's shocking past comes to light, Alera finds herself in a shadowy world of palace intrigue and ancient blood feuds, facing an uncertain future with dwindling options - and must learn to decide between right and wrong all alone.
The Review
In Princess Alera's world, duty is everything to her father's kingdom, one that will soon become her own as she is the true heir to the throne. But because she is a woman - someone who cannot rule alone without marrying - she is forced into a betrothal with a young man her father believes will become a great king and whom every girl in the country would give anything to be with, especially someone so handsome and so charming as Steldor is. Unfortunately for Alera, she despises him and his huge ego, along with his attitude towards life that she can never seem to get past. But as she buys some time for herself, in hopes of finding another suitor that her father will approve of (though there aren't many to choose from), she then meets the mysterious and alluring stranger, Narian. And as as Alera's attraction to him grows each and every day, there comes with plenty of deep and dark secrets that could - and will - change everything.
When I first heard about this book, I wasn't sure what to think of it except that a sixteen-year-old Cayla Kluver wrote it (yes she wrote this whole thing at that age) and to me that is an amazing achievement to have under your writing belt. But when I kept putting this book off and off, and coming across so many raving reviews, I knew I had to read it and boy did I LOVE every moment of it! Whether it's the characters, the setting, the storyline, or even the length of the book (which could've been shorten), I just loved it and I could see why so many readers fell in love with this first installment of a trilogy.
There's one thing I loved about this book and that was Alera, the main heroine. She had the essense of a Jane Austen character - someone who with strong beliefs and opinions, someone who understood what was expected of her, and someone who wanted to make everyone else happy despite her own unhappiness to be the end result. For her to remind me of thes likes of Elizabeth Bennett from Pride & Prejudice, it was a great way to suck me into a book and I think a lot of readers will love that aspect too. After all, Alera is constantly surrounded by bodyguards, she lives by strict rules and dress codes, and it was so very interesting to read about her, her society, and her kingdom.
As for Narian's character, I'm sooooooo in love. I was a little unsure when I first met him because he concealed himself so very well. It made him even more mysterious than he already was. However, once you get to know his character and see him opening up a little bit, it was a great change to witness and well . . . he's hot after all. I mean, he's a thief, he's sometimes disrespectful but in a good way type of thief, and he might be really shady at times, but who the hell cares when he cares so much about our Alera and respects her for who she is rather than saying, "She's a woman. We don't talk to women or care what they have to say because she's a woman." He truly cared about her. And as for Steldor, the man Alera is supposed to marry or rather being forced to marry, he was the character I wanted killed as soon as possible. Another blogger had said he reminded them of Gaston from Beauty and the Beast and that was exactly what I was thinking!? He has the looks to guide him through a man-ruling society, he's someone every girl wants, but he's also a character with so many flaws and he's oblivious to everything around him - especially when it comes to Alera. He was an idiot and I wanted Narian or at least someone with a weapon to kill him. But unfortunately for us . . . none of that happened. This saddens me.
On a whole, there's so many great things to say about LEGACY and so little blog space to write every bit of detail about it. If you're a fan of high fantasy, kingdoms, fairytales with a little bit of twist and a little bit of betrayal along the way, then LEGACY will be your right kind of book. With essences of Jane Austen and Kristin Cashore, LEGACY will leave you hanging for more and anxiously waiting for its sequel Allegiance, which is due to be released sometime this year. And I for one, cannot wait for the sequel! Talk about an ending!!!
The Rating