The Mephisto Covenant by Trinity Faegen 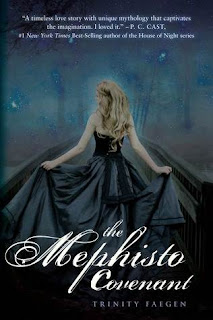 Release Date: 27th September, 2011
Publisher: Egmont USA
Pages: 439pgs
The Story
Sasha is desperate to find out who murdered her father. When getting the answer means pledging her soul to Eryx, she unlocks a secret that puts her in grave danger - she is an Anabo, a daughter of Eve, and Eryx's biggest threat.
A son of Hell, immortal and bound to Earth forever, Jax looks for redemption in the Mephisto Covenant - God's promise he will find peace in the love of an Anabo. After a thousand years, he's finally found the girl he's been searching for: Sasha.
With the threat of Eryx always looming, Jax knows he has to keep Sasha safe and win her over. But can he? Will Sasha love him and give up her mortal life?
The Review
Judging by the raving reviews I've come across lately, I found that most readers loved this book. For me it was all about the cover and it was the initial reason why I'd picked up this book in the first place, along with the interesting storyline it presented to me. While the premise of THE MEPHISTO COVENANT was original and intriguing in its own right, but sadly I struggled with many parts of the novel. However, this doesn't necessarily mean you won't enjoy it either.
The main problem wasn't exactly 'the storyline' itself, it was more about the characters than anything else. There was a lot to keep track of - with some characters having their own little stories which can be a good and bad thing for a book - and even the main ones were hard to find likeable qualities in them. Sasha for example, the main heroine, was falling on hard times and I understand that and what she's going through, but she was . . . it's hard to describe. She was someone different and let's just leave it at that. Jax on the other hand was a strange guy and you have a love and hate feeling about his character. For one, he was a creeper in my mind. Two, he was pretty possessive over Sasha and I wanted him on leash or at least something to restrain him and his certain 'thoughts'. And thirdly, he was just well . . . again damn right creepy at times. But he cared about Sasha, I can give him that. Some girls may swoon over this guy but . . . hmmm. I don't know about him except that he reminds me of that awkward situation where a creepy guy watches you from afar and you tend to stare at that creepy guy with widened eyes sending the clear and obvious signal of, "I will kill you if you stare at me one more time!" Yeah you know . . . those moments.
With interesting mythology, I would have to say that was the only reason why I kept reading this book and mainly because I wanted to see what would happen to the characters who'd found themselves in very difficult and stressful situations. But despite these new and interesting myths, what really surprised me - something that I was really taken back by - was the sexual content in this novel. There are many well-respected and presented arguments against sexual content in young adult books but in THE MEPHISTO COVENANT I was very shocked at a certain sex scene in the novel. It was pretty graphic and for a second I thought I was reading one of my paranormal adult books. I mean, not even Twilight's Breaking Dawn sex scene was this graphic. At least as far as I remember. Anyway, it wasn't a long scene (thankfully) but I thought it was inappropriate for YA novel and while I don't mind a sex scene when they're needed, but I don't know . . . this one would make all those arguments about sex content all wrong and silly. So, clearly this is meant for older teens.
Overall I finished the book and enjoyed its moments. If you love the books containing interesting mythology with new twists, unique characters with their own sets of stories, and some insta-love that may or may not creep you out, or if you're looking for something along the lines of Twilight, then you're going to enjoy this book for sure!
The Rating