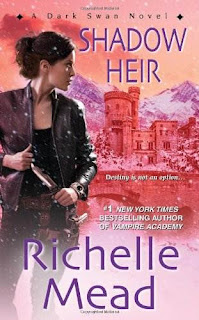 Release Date: 27th December, 2011
Publisher: Zebra
Pages: 390pgs
The Story
#1 New York Times bestselling author Richelle Mead returns to the Otherworld, a mystic land inextricably linked to our own - and balanced precariously on one woman's desperate courage . . .
Shaman-for-hire Eugenie Markham strives to keep the mortal realm safe from trespassing entities. But as the Thorn Land's prophecy-haunted queen, there's no refuge for her and her soon-to-be-born-children when a mysterous blight begins to devastate the Otherworld . . .
The spell-driven source of the blight isn't the only challenge to Eugenie's instincts. Fairy king Dorian is sacrificing everything to help, but Eugenie can't trust the synergy drawing them back together. The uneasy truce between her and her shape shifter ex-lover Kiyo is endangered by secrets he can't - or won't - reveal. And as a formidable force rises to also threaten the human world, Eugenie must use her own cursed fate as a weapon - and risk the ultimate sarcrifice.
The Review
SHADOW HEIR is the fourth and final installment of Richelle Mead's Dark Swan series, and if you haven't read this fantastic adult urban fantasy series, then I highly recommend it.
SHADOW HEIR picks up a few months after Iron Crowned (book 3 of the series and you can read my book review of it here). Our girl Eugenie has always been the heroine to be one step ahead of her enemies and manages to protect everyone she loves and cares about, with the generous help of Dorian of course, the Fairy King, because he's just awesome that way. As she's the Queen of two different lands of the Otherworld, it's hard to balance a magical life and still retain a normal one as well. But a so-called normal life is being thrown completely out of the window when a new enemy arises, leading Eugenie and Dorian to reunite with the most unlikely enemies for both the sake of humanity and of their kindgoms in order to survive on harsh times. With very surprising plot twists, tough decision making and even delightful characters to add to this wonderful story, this book will not disappointed you. Well, not so much.
To my surprise I found SHADOW HEIR to be - by far - my favourite book in this saga and for once in their very complicated 'little' lives, I felt Eugenie and Dorian had finally gotten back to their roots, deciding to be even more real and honest with one another. Finally! Regarding Eugenie's character, you have a few love and hate issues with her. You love her strength and admire her responsibility to protect people as a shaman, but on the other hand you also hate her rushed decision making and making stupid decisions for the wrong reasons. But you love her anyway despite her mistakes. In this fourth book, Eugenie has grown up a lot and I rarely found her annoying when it came to her final decisions for the greater good. She's learned from her mistakes. The same goes with Dorian's character too, whom I've loved from the very beginning. Unlike Eugenie, Dorian hasn't made stupid decisions except for when it came to his and Eugenie's relationship. And, for once, he finally laid everything down on to the table and became honest about how he feels about Eugenie. How I love you Dorian! You're the only man who IS a man. Just saying . . .
Now this leads me to the other leading man in the love triangle equation - that being Kiyo. He is the suppose 'father' of Eugenie's unborn children, twins in fact, and that just peeved me off because after a week or so after she had sex with Kiyo (yes how could she do that to my Dorian!!!!), she then slept with Dorian (yes thank god she did that!!!!), and as you can see Eugenie doesn't have a good head on her shoulders when it comes to her lovers. But whatever. Kiyo is pretty much the same Kiyo you've seen from book one to book three. He's the same egoist jerk who deeply believes in the prophecy of coming true in regards to the son Eugenie is currently carrying. Please note you'll have to read the other books in order to understand this one. Anyway, Kiyo just peeved me off and I wanted Dorian to do anyway with him. But again whatever. Just be aware Kiyo will be on your nerves and that Dorian will help you feel less stressful about Kiyo still being alive. Go Dorian!!!!
While I thoroughly enjoyed this book and while it's my favourite of the Dark Swan series, but the reason why I'm giving this book 4 1/2 stars instead of its well-deserved 5 stars is because of the damn ending! Sure, it ended in a way that made me jump for joy and left a partial smile on my face, but there's something that happened in the book - some rash decision Eugenie makes - that I could NOT support one bit. It didn't make sense to me. I understand why she made this certain 'decision' if that's what you would call it, but I don't know . . . it was sure disappointing. And so sad too. Anyway readers, if you do happen to read this book you'll need to prepare yourself for a not-so-smooth ending and probably find it the worst way to end a book while also feeling melancholy. Despite that, I still loved the rest of the ending. It's a half-love and half-hate thing going on here.
To wrap up this book review, do yourself a huge HUGE favour and pick up this series! With most of the storyline closed up nicely, SHADOW HEIR is another lovely addition to Richelle Mead's books and it's one of my favourites of 2011! So be sure to check it out when you can! Dorian people! Do it for MY Dorian!
The Rating