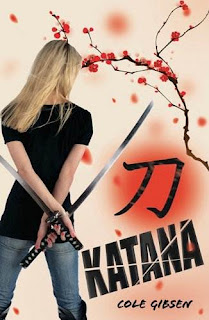 Publisher: Flux
Pages: 384pgs
The Story
Kill Bill meets Buffy in this supernatural samurai tale.
Rileigh Martin would love to believe that adrenaline gave her the uncanny courage and strength to fend off three muggers. But it doesn't explain her dreams of fifteenth century Japan, the incredible fighting skills she suddenly possesses, or the strange voice giving her battle tips and danger warnings. While worrying that she's going crazy (always a reputation ruiner)m Rileigh gets a visit from Kim, a handsome martial arts instructor, who tells Rileigh she's harboring the spirit of a five-hundred-year-old samurai warrior.
Relentlessly attacked by ninjas, Rileigh has no choice but to master the katana - a deadly Japanese sword that's also the key to her past. As the spirit grows stronger and her feelings for Kim intensify, Rileigh is torn between continuing as the girl she's always been and embracing the warrior inside her.
The Review
A big thanks to Flux on netGalley for accepting my request in reading this book early!
There's no hidden secret when I say I'm OBSESSED with Japan, katana swords (always wanted to buy one for myself even though my family don't trust me with any sort of sharp objects) and the overall culture of it all . . . especially the history of the Samurai. That is what I love to bits. When the news came around to me about this book featuring everything I'm dying and looking for in a book - what with a nice mash up of Buffy and Kill Bill - I was ready for something to blow my mind and entertain on different levels. Despite the kickass summary and its awesome title, unfortunately the book was a bit of a disappointment. Sadly.
The storyline was entertaining - don't get me wrong here - and it had a lot of potential for readers seeking some hardcore action. But my biggest struggle was the heroine herself, Rileigh Martin, whom was your usual teenage girl. Being an aspiring writer myself, I know it's extremely hard to write a likeable main character and project a realistic voice that you hope one day everyone will come to like and respect. But for Rileigh, her character didn't seem to strike me as very likable at all and she didn't necessarily seem realistic in any sense I'm afraid.
Rileigh had her good moments of comedy (I'll give her that) and some light-hearted moments shared between her and the supporting characters, but I couldn't quite connect with her. Perhaps it was because she was always in denial throughout the novel. I have the same feelings with Rileigh's 'stereotypical' gay best friend, a boy named Quentin, whom is displayed as more like a girl than anything else. I've known people who are gay and only one boy I've come across acted somewhat like a girl . . . only with less irritation and squealing. Maybe I'm wrong about this but Quentin's inner girl - after all, he thinks he was a Marilyn Monroe in his past life - should be toned down a bit since the gay people I'm friendly with aren't like this one bit. The only real character I didn't mind was Kim, the love interest of KATANA. He was the Asian Yoda and I loved his wiseness.
Like where most young adult romances go, the romantic relationship between Rileigh and Kim are what you come expect in a book like this one. Cliche but readable. I love asian guys (again no secret there) since they have plenty of surprises in bust-a-moves and Kim's kickass side was perfect. He's a martial arts instructor after all - you have to love that about him! While he's the only asian among the group and while I understand reincarnation is involved and responsible for this 'change', but I kind of wished for more asians considering it's an asian-based book but you can't get everything you want in a book. Back to Kim - he was awesome most of the time. He was serious - a little too serious - and blabbed repetitively about being the 'Chosen One' and la de da, but Kim was a character with a purpose and had far more drive than the main character did herself. Not to mention the only time I was really entertained was the flashback scenes of ancient Japan . . . THEY WERE AWESOME! Wanted more of them though.
Overall, despite my disappointments and already knowing the predictable events that would occur within the book before they even happened, I can definitely see a lot teenagers enjoying this book. With a nicely-paced storyline, with the right amount of snark, along with some great action sequences and nicely-written historical knowledge, I can guarantee if you're a fan of Japan, reincarnation or martial arts itself, then you'll love this book. It was a pity that I didn't enjoy it as much as I wanted to but it just wasn't the right book for me.
The Rating