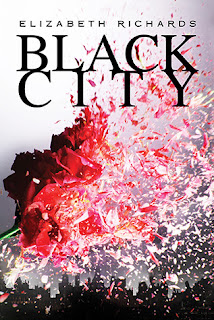 A dark and tender post-apocalyptic love story set in the aftermath of a bloody war.


In a city where humans and Darklings are now separated by a high wall and tensions between the two races still simmer after a terrible war, sixteen-year-olds Ash Fisher, a half-blood Darkling, and Natalie Buchanan, a human and the daughter of the Emissary, meet and do the unthinkable—they fall in love. Bonded by a mysterious connection that causes Ash’s long-dormant heart to beat, Ash and Natalie first deny and then struggle to fight their forbidden feelings for each other, knowing if they’re caught, they’ll be executed—but their feelings are too strong.

When Ash and Natalie then find themselves at the center of a deadly conspiracy that threatens to pull the humans and Darklings back into war, they must make hard choices that could result in both their deaths.

The dystopian bandwagon is something I'm more than happy to jump aboard on, but lately I've been hesitant in reading the genre lately as no other author has really done anything too original or special with it (especially with fantasy elements added onto dystopian worlds). But moving past that, Elizabeth Richards's debut novel, BLACK CITY, offered something new and exciting to the genre - maybe not so much in the romance department, but there was just enough there to get me hooked on the storyline and I'm quite taken back by how much I actually enjoyed it.

Within the protective walls of BLACK CITY, we are quickly introduced to a world of ruin, blood, controlling governments, and a very deadly war that is pitted against two entirely different races - those belonging to humanity and those of dark and deadly creatures referred to as Darklings. Vampire creatures basically. So with humans not being too accepting of Darklings, it not only increases the tension around this new American-like world but it also causes riots around the city as people want to only seek peace from this war. But surrounded by this very interesting and cruel world there are two teenagers, Natalie, a human and the daughter of an Emissary official, and Ash, the half-Darkling boy, who will soon become forbidden, star-crossed lovers and who may be the only key to putting an end to this bloody war.

Story-wise I thought everything was brilliantly written! Fast-paced, action-packed, romantic, full of hair-raising tension, and completely captivating in all descriptions of the world, there's really nothing bad to say about this book except for the romance that was developed between two of the main characters which was - at times - a little off-putting and not believable enough for my own liking (even though this sudden romance and connection is explained later in the book). But despite that, I loved everything else . . . even the romance which was still addictive to read about. But as far as the characters go, I have to say they were the best part of the book more so than the actual storyline!

Natalie, one of the main characters, was someone I liked from the very beginning. However, it did take me a while to actually warm up to her character. I guess, in some instances, this had a lot to do with her many conflicting emotions that she experiences on and off again in regards to Darklings and other related war things in her strict world. But, on a whole, I really liked her as a character and she grew on me later on too, especially when she became much more stronger and mature at the half-point of the book. She had learned more about herself by then.

But the true shining star of this book - in all honesty - would have to be Ash, the half-Darkling boy Natalie falls hopelessly in love with and for unexplained reasons (though you do eventually find out why she loves him in those insta-love ways). He was just . . . the awesome love interest you can't help but love. No really he was pretty great! Sure he was a little . . . moody and a little too proud for his own good, but he was still one awesome dude to read about. I mean, Ash just has this really convincing voice and he seemed such a genuine sort of character as well, which I guess made me believe more in him than of Natalie's character and it's probably the main reason why I liked him so much. But together or not, he and Natalie are perfect as a couple and as individuals, and I hope they remain so in the upcoming sequel.

Overall, BLACK CITY has everything going for it and has become a favourite book of mine too. While you can quickly move past the insta-romance, in the end all of the right elements molded perfectly together and I'm really excited to read the next sequel, Phoenix, which I'm sure will be just as brilliant as this book. I just have one of those feelings.