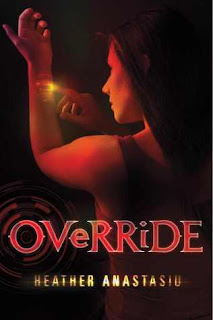 Zoe is free. She has escaped the enslavement of the Community, disconnected from the hardware that had controlled her every thought and emotion, and evaded capture by the Chancellor intent on killing her. She is finally free, but she is far from safe.Zoe and Adrien hide themselves from detection at the Foundation, an academy that trains teen glitchers to fight in the Resistance movement. Together, Zoe and her new team of superhuman fighters must risk their lives to rescue other glitchers and humans from the Chancellor's control. Challenges abound at every turn, and Adrien, who has become silent, distant, and tormented by his visions of the future, only adds to the growing certainty of defeat. But worst of all, as Zoe's team fights against impossible odds, distrust and betrayal leads to the terrible discovery that their greatest threat could already be lurking behind the safe walls of the Foundation.

A big thank you to the publisher on netGalley for accepting my request in reading this book early!


Here's the thing: I wasn't a big fan of Glitch, the first installment of this YA trilogy, and at first I didn't even want to consider reading the sequel because I was incredibly worried to be disappointed by the book yet again. And I don't want that at all (to be disappointed that is) because there were so many other readers who had loved the first book. But . . . I read this sequel anyway despite my initial opinion on the series and - surprisingly - I actually really, really enjoyed this book. I know, I know . . . wow, what a turnaround it was for me and about time too. I love being surprised like this!

OVERRIDE is everything I love in a sequel. Action-packed. Super-powered characters. Dangerous missions. Unexpected twists-and-turns. I mean, this book was not only a great read but it also had so much more to offer than the first book ever did, what with the author opening her world to me a far lot more and what with her characters growing up more in tow as well, not to mention there was plenty of drama to get your mind reeling from it all . . . I just loved it! The characters especially never once annoyed me like some did in Glitch and for once I actually felt the main character, Zoe, was someone who added such drive and vulnerability to the storyline, so I'm very thankful to come and appreciate Zoe's character more.

Now I don't really want to say more here in case of any spoilers, but the only complaint I have is about the ending or rather what happened before the ending actually came. I mean, something very significant happened to another character in this book and I was a bit taken back it, leaving me saying, "Well, what happens now? This character is really important and now this happens to he or she." But apart from that, it was a still a great book and a vast improvement to the first installment of Glitch. So, if you were disappointed by the first book like I was, then I would strongly suggest you pick up this sequel when its released because I rated the first book 2.5 stars and if you look at my book rating below, you can obviously see the difference of my opinion after having read this sequel. Trust me . . . it's really good.

Overall, even though I didn't love Glitch, it's fair to say Heather Anastasiu really steps up her game in her sequel OVERRIDE and surprises me throughout the entire book! It was a very awesome read and I can't wait to read the third and final installment of this trilogy! I hope everything gets much better for the characters considering what happened just before the ending really, really hits us!