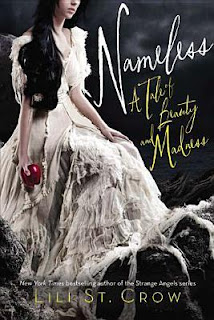 When Camille was six years old, she was discovered alone in the snow by Enrico Vultusino, godfather of the Seven—the powerful Families that rule magic-ridden New Haven. Papa Vultusino adopted the mute, scarred child, naming her after his dead wife and raising her in luxury on Haven Hill alongside his own son, Nico.Now Cami is turning sixteen. She’s no longer mute, though she keeps her faded scars hidden under her school uniform, and though she opens up only to her two best friends, Ruby and Ellie, and to Nico, who has become more than a brother to her. But even though Cami is a pampered Vultusino heiress, she knows that she is not really Family. Unlike them, she is a mortal with a past that lies buried in trauma. And it’s not until she meets the mysterious Tor, who reveals scars of his own, that Cami begins to uncover the secrets of her birth…to find out where she comes from and why her past is threatening her now.New York Times bestselling author Lili St. Crow thrilled legions of fans with her dark paranormal series Strange Angels. Now she has crafted an evocative update of Snow White, set in a vividly imagined world and populated by unforgettable new characters.


Hmmm . . . I'm not sure what to think about this book to be honest with you. No really, I don't. Being far different from the story to which this one was inspired by, Snow White and the Seven Dwarfs, Lili St. Crow's NAMELESS, the first installment of the Tale of Beauty and Madness series, is  the kind of book you really need to focus on until the very end because I, somewhat, got very confused by the book at certain times and had to re-read certain sections to understand some things. Still, it was all very original. Quirky in a weird sort of way too, but original for the most part.

NAMELESS had a wonderful thing going for it - both originality, an odd new tale, and simply not being yet another modern retelling of a classic fairytale. I liked that part about it. It being different from most retellings. But what I struggled with the most was two main things: the characters and the flashback memories that occurred consistently in the book.

For the character side of things, I found each one fascinating and interesting, especially the dark and mysterious boy named Nico who was my favourite character, but it was the main one, Cami, that I fought long and hard for to like and it was probably the major problem for me in not liking this book all so much. I mean, I like well . . . liking my main heroines and connecting to them (even a small connection will do) but Cami for some reason just didn't connect with me as she was really different personality-wise and she stuttered a lot that poor girl! I think Cami's stuttering was probably the main reason why I didn't like her to begin with because for one it had annoyed me on many levels and secondly with how the stuttering was written on each page just continually gave me eye seizures every-time I read those stuttering passages as sorry as I am for saying it. Yeah . . . I wasn't a big fan of hers. But give me this boy Nico any time of the day! Loved him.

Overall, NAMELESS was quite an interesting read. While I do appreciate the new retelling of Snow White and how Crow approached it in her own writing ways - and even how I liked the story more so than the characters themselves, but this book just wasn't for me in the end which was rather a pity considering how I was so excited to read it this year! Still, if you love Lili St. Crow's previous works, both with her adult and young adult series work, then you're going to love her writing in this book regardless of what I said and will come to like her new, refreshed tale of a fairytale classic! It was definitely an unique take and because of that (and because Nico's character of couse) is the reason why I'm giving it the 2 1/2 stars for it!