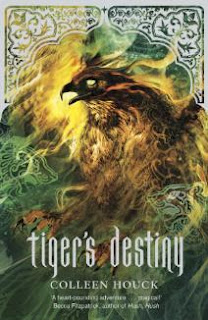 With three of the goddess Durga's quests behind them, only one prophecy now stands in the way of Kelsey, Ren, and Kishan breaking the tiger's curse. But the trio's greatest challenge awaits them: A life-endangering pursuit in search of Durga's final gift, the Rope of Fire, on the Adaman Islands in the Bay of Bengal.

It's a race against time--and the evil sorcerer Lokesh--in this eagerly anticipated fourth volume of the bestselling Tiger's Curse series, which pits good against evil, tests the bonds of love and loyalty, and finally reveals the tiger's' true destiny once and for all.

This ending is pretty close for this series and my heart already feels it coming, waiting in anticipation that hurts way too much. I've been a big fan of this series for quite some time now and in the fourth installment of The Tiger Saga series, TIGER'S DESTINY, it's all about where Ren and Kishan go looking for Kelsey Hayes after Lokesh kidnapped her. So with many new adventures ahead, new alliances aligned, and some really sweet and tender moments between some very extraordinary characters, it's fair to say this book is my absolute favourite of the series by far and one that sets your own heart racing a million miles an hour! There's no doubt about it because it's a heart-string-tugger this one!

Much like what I've read in the previous books, TIGER'S DESTINY has once again filled my heart with its never-ending cycle of fantastic adventures and it's awesome, lovable characters. I won't get into too much detail with this book but oh my gosh all of the characters are just too perfect! While the main character, Kelsey seems immature at times and can be annoying for making some rash decisions here and there, but everything changes for her in this book and we all finally get to see a much more mature side to her, one we can all respect her for. But it's more than just Kelsey's growth in this book - it's Ren and Kishan's love for her and the ways they want to protect her from harm, it's just so . . . HOT.

But here's the real kicker for me: I was a total Ren fan in the previous books and yet I started to fall even harder for Kishan. Especially in this book. Especially, especially, especially in this book! Honestly what's a girl to do in a situation such as this one? Two hot guys. Two lovely and sweet hot guys? But yeah, like I said before, I won't mention any spoilers here, but those Ren fans out there - ones like me - who have lot of trouble in trying to hate Kishan's character, let me just say Kishan will make your heart melt because he was such a sweetheart and a total standout for me in this book. I mean, of course, I still love you Ren but you know . . . you can't be the only hot guy I'm allowed to love.

Overall, with action-packed adventures, beautiful storytelling, invigorating characters, and shocking moments all in-between those elements, Colleen's fourth installment of her series, TIGER'S DESTINY, really sets the bar up high and it'll be interesting where the last book takes us to next considering this book closes off very nicely with such a bittersweet feeling in the air!