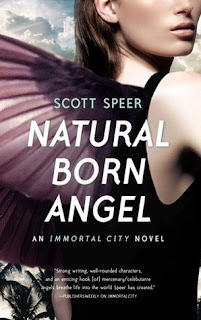 Life turned upside down for Maddy Montgomery when she found out she was half-Angel and was catapulted into the scene of flashbulbs, paparazzi, and the fervent adulation that comes with being in the celebrity Angel world. She's trying to juggle her ordinary life—high school, family, friends—with the intense demands of being in the public eye as heartthrob Angel Jackson Godspeed's girlfriend.And now Maddy must face the most difficult choice of her life. She's been offered the chance to become a Guardian. This means entering into dangerous and high stakes training, with no guarantee that she can succeed. But more than that, it would mean leaving her mortal life behind—forever—and allying with the Angels at a time when their relationship with humans is heading for war. . . .


Honestly I was so excited to get the opportunity to read this book early! After loving and practically worshiping Scott Speer's debut book, Immortal City, there was about a 99.9% chance of loving the next sequel of his as well and I did. Maybe not as much as the first book, as this one was a tad bit predictable and lost the great suspense that the first book once had, but regardless of that, I loved this precious little gem and it's one of the best books I've read in the angel genre by far!

NATURAL BORN ANGEL is the game changer of the book series. Not only do things get even more hectic in the angel and celebrity-like world of Scott Speer's, but the characters also face many changes within themselves too and in their relationships with others, especially with who to trust and not to trust. The main character, Maddy, for one, was someone who I would consider being really strong in the first book but after finding out that she is a half-Angel and must now decide where her loyalties lie with, things become even more challenging for her and . . . she does show a much more vulnerable side to her this time round in the sequel which made things quite interesting for me. It was a nice change. Seeing her vulnerability. But for the most part, I believe she got stronger by the day in this book and allows things take their natural course . . . even when her relationship with another angel, Jacks, begins to crumble.

Now Jacks on the other hand, Maddy's main love interest, was someone I adored from the first book, Immortal City. He was handsome, confident, outgoing, strong, always fighting for love, and was completely lovable all the way round, and you could clearly see what Maddy saw in him to begin with. But for some reason I began to see a really different side to Jacks in this sequel, more so in his naivety and arrogant side of his personality. He was always so closed off in this book which strikes me as odd considering what he used to be like in the first book, but I guess when you used to be the guy everyone wants to be like and love, and then suddenly when your new girlfriend is the next 'IT GIRL' and your celebrity status then begins to crumble all around you . . . I guess that's when the jealously and bitterness starts to kick in. Yeah Jacks . . . I'm talking to you here! How you disappointed me! Let someone else have the spotlight for a change.

Overall, NATURAL BORN ANGEL was a great sequel! Despite its some ups and downs here and there, I'm still eagerly awaiting the third and final book of the trilogy, and finding out who Maddy will choose in the end considering the cliffhanger we got: The side of humanity or the side of the angels?