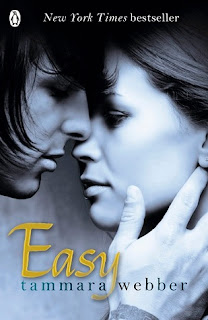 Easy is a New York Times Bestseller - a must-read for everyone who loves Slammed by Colleen Hoover and the New Adult genre. Deeply romantic and utterly gripping, this is not to be missed.Jacqueline seems to have a knack for making the wrong choices. She followed her boyfriend to his choice of university, disregarding her preference. Then he dumped her. She chose a minor she thought she could combine with her music studies, but she's falling behind. And then, leaving a party alone one night, she is attacked. If it wasn't for the timely intervention of a stranger, she would have been raped. Now she must make a choice - give up and give in, or toughen up and fight on. Only the support of the man who is tutoring her and the allure of the guy who saved her from the attack convince her that it's worth fighting on. Will Jacqueline now have to make a choice between them too? And can she make the right decision? It's not easy . . .


Over the past few months I've heard nothing but amazing things about this previously self-published novel, EASY, so when I heard the publisher Penguin had bought rights to the book and had planned to release it into a new paperback version, I was very much looking forward to reading this book, especially since I'm now a big, crazy fan of this New Adult genre that is taking the book world by storm.

Right from the first page, EASY - surprisingly - had actually turned out to be a very gripping read for me and it connected with me too unlike some books as it is intended for a much older teenage audience (I'm 21 so I'm so old now haha). At least it was gripping for the most part. But despite the glowing reviews and while reading this book, something in the back of my mind was telling me that something was missing in this particular book title. Something that could explain all of those high-praising and glowing reviews. I don't know what exactly was missing in this book - whether it was the slow pacing or the character's annoying actions - but this book just wasn't as amazing as others had described of it nor was it what I expected it to be like. Still, the storyline continued to get better along the way and in the end everything was well-justified . . . ending everything on a high note.

Regarding the characters, Jacqueline, for one, was a decent main character. Sure she's not exactly someone I would aspire to be like nor someone I would consider a great role model for younger teenage readers as she has made plenty of mistakes in the book, but I really did feel for her character and what she was going through at the time. Especially when someone attempted to rape her at the beginning of the book. Now that was very confronting and the situation within itself was really hard for her to deal with understandably. So while Jacqueline does show courage and matures overtime in the best ways possible, and sees what potential she had all along, but I guess the main reason why I didn't connect well with her as I could have is simply because we're not like alike as people but she was still a joy to read about.

As for Jacqueline's new and potential love interest, Lucas - the pierced, tattooed, semi-part bad-boy who rides a cool motorcycle and has a lot of careers unlike most college students - he was someone quite interesting to read about as well. Sure he did have his charms and quirks about him, and had said all of the right - and sometimes wrong - things at times, but I didn't exactly 'swoon' over this dude as other have. Mostly because he was just well . . . he had way too many jobs in this book (a lame excuse I know but he did) and it just seemed way too coincidental for him to be always around Jacqueline wherever she seemed to be. I mean, I do believe in chance and fate at certain times but it seemed too 'oh come on' and 'no way!' sort of thing, you know? Still, Lucas was a better guy than most presented in this book and that's saying something considering most of the guys in this book were jerks.

Overall, EASY was an incredibly easy book to read. The book may not have resonated the epic things people have said about it and at times it was quite hard to connect with most of the characters, but on a whole it was an enjoyable read for me and a much better one than another New Adult book, Beautiful Disaster, which this book shared similarities with. Only this book contains a better message for its readers about heavy issues and relationships.