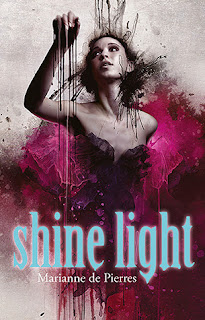 Ixion. The island of ever-night.
If she had a choice, Naif wouldn't go back. But her friends will die if she doesn't find a cure for the badges that are slowly killing them, and her brother is there, fighting against the Ripers who hold everyone in thrall. And Naif has knowledge that might save them all.
First she must solve the mystery of Ixion’s eternal night. Then she must convince everyone – rebels and revellers alike – to join her cause. And all the while, she must fight the urge to go to Lenoir – her greatest love, her mortal enemy.
The secrets of Ixion must be revealed. The evils must be stopped. A new dawn will come.


SHINE LIGHT is the third installment to the Night Creatures series. Having loved its predecessors, Burn Bright and Angel Arias, Marianne de Pierres has certainly set up a very lush and a very unique world for her readers and one where you cannot help but be swept up by it all. And, in this final conclusion, it bears no difference through my eyes because it's just as adventurous, as dark, as thrilling, and equally as intoxicating as Pierres's previous titles!

Unlike the other two titles, what I loved most about SHINE LIGHT was how fast-paced it was and how it had this race-against-time kind of vibe going on with it . . . I just loved it! It didn't waste time with the unnecessary details that we were already aware of (which a lot of sequels tend to do nowadays) but rather just dived straight into the action of where these teenagers are trying to survive and fight against these night creatures terrorizing all of humanity. Or rather what's left of it. It was sure thrilling to say the least! But not only that, I loved the characters too - including Rollo, Suki, Markes, Ruzalia, Dark Eve and Lenoir - who had played such a prominent role this time round in the book, and gave our main character, Naif, such strength towards the final climax of the book!

Now all of my love and high praises goes straight towards Naif, our main character, who was such a joy to read about and she has grown so much within the course of this series! I don't know what it is about her but there was always something so compelling about Naif's character and for those readers who have actually read this book . . . you will know what I mean! But then there's Lenoir, a favourite character of mine, who I was always cheering for despite some people not liking him so much. I guess he's not exactly a hero nor the good guy you want him to be but . . . I loved him and I guess I was hoping for something more from his character but . . . I'll take what I get from him and it was enough! Trust me.

Overall, SHINE LIGHT was such an enjoyable read for me! Even though the ending didn't entirely satisfy me as there were so many questions left unanswered and where I expected so much more to happen in the actual ending, but regardless there was still enough love there in this book and I can't wait to see what else this Aussie author has up her sleeve next! I'm sure it will be amazing as this series was!