The Last Girl by Michael Adams 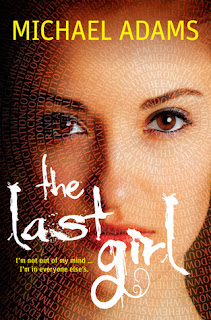 The end of the world happens in the blink of an eye.When The Snap sweeps the globe, everyone can instantly hear everything that everyone else is thinking. As secrets and lies are laid bare, suburbs and cities explode into insanity and violence. What might have been an evolutionary leap instead initiates the apocalypse.Sixteen-year-old Danby Armstrong's telepathy works very differently. She can tune into other people but they can't tune into her. With only this slender defence, Danby must protect her little brother and reach the safety of her mother's mountain retreat. But it's 100 kilometres away and the highways are blocked by thousands of cars and surrounded by millions of people coming apart at the psychic seams.Danby's escape is made even more dangerous by another cataclysm that threatens humanity's extinction. And her ability to survive this new world will be tested by a charismatic young man whose power to save lives may be worse than death itself.

A big thanks to Allen & Unwin for sending me a review copy of this book!

What can I say? I absolutely enjoyed this book more than I thought I would. So while I may not have heard of it before until the publisher had sent me a review copy of it, but I must say it was a very pleasant surprise for me indeed. Think an Australian Hunger Games with an Australian Katniss-like heroine. Yeah, I like the sound of that too.

As I was reading THE LAST GIRL, I may have been rolling my eyes at some point because there is so many dystopians out there already that it's hard not to compare them to other dystopian books, but what was awesome about this particular book was that it soon grew on me and that it was also set in Australia too, so you can't argue that Australia is the perfect place for a new dystopian book. One, because I happen to live in Australia, and two, there are not that many Australian settings in dystopian books so I like seeing that difference in the genre alone and boy was it great!

Now regarding the characters, while I won't give away anything about the story and such (because I think you should experience it for what it is on your own), but to be honest with you, the best part of this book was our main character, Danby, who was like a Katniss Everdeen, someone who is a reluctant heroine and yet becomes a heroine anyway without even realizing it. And I just love that the character felt like she has nothing to prove to her readers than just being her average-but-amazing self. So just you wait readers, Katniss may have just met her match in this book and you'll definitely get to see why in this new book. Gotta love this girl!

Overall, THE LAST GIRL is definitely a great start to a YA dystopian series and I'm so looking forward to reading the sequel next year which I'm sure is going to be just as great as this book was. Man, what a ride.