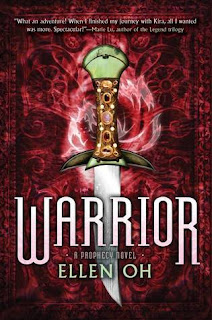 
First an outcast, now a hero.But her fight rages on.Kira, the yellow-eyed demon slayer who fiercely protected her kingdom—and the crown prince—has been proclaimed the Dragon Musado of the prophecy. With the defeated the evil shaman.But it wasn’t enough. Hansong is in chaos. The Demon Lord’s minions have infiltrated the city, treason is brewing among the military ranks, and Kira is buried by the overwhelming loss of her parents. She’s also plagued by the annoying feelings that blossom whenever she’s around Jaewon. But she is determined that nothing will stop her from finding the second treasure needed to fulfill the Dragon King’s prophecy. Not even the army of half-breed demons hot on their trail. If only she could learn to trust others . . .Her father always said one person can change the world. Will it be Kira?

A big thanks to the HarperTeen for sending me a review copy of this book!

This sequel may not have been as epic amazing as the first book was, that being Ellen Oh's debut novel Prophecy, but it was almost just as good. While I won't give out any spoilers or summaries of the book in case you haven't read the first book in the series just quite yet, but let me tell you this Asian-inspired fantasy book is definitely one that has impressed me thus far in the YA genre and considering it concerns itself with Korean culture . . . it's pretty much a bonus for me because I love that culture within itself.

Firstly, let me just say that WARRIOR would not be so amazing if it didn't have the main character, Kira, in it. Kira, in my opinion at least, is seriously one of the best kick-ass girl characters that I have come across lately and she doesn't even have to prove much of anything really because she just IS kick-ass without even trying to be. Her strength, her dedication to her duty, her mere attitude towards others and her fearlessness of her enemies just shows what a well-rounded character she is and what a lethal weapon she can be, and boy I just want to be her because she is so awesome! You go girl!

In terms of the storyline, everything is just as it should be. Interesting. Entertaining. And flawless. Ellen Oh's writing alone flows so easily as I read each and every chapter, and not once does she make her fantasy world so complicated for me to follow, at least not like how some fantasy books end up being like. So of course and yet again, I would enjoy the author's tale once more of Kira's journey and I can't wait to read more from her because well . . . I love this series.

Overall, WARRIOR was such a great sequel and a great follow-up to Ellen Oh's Dragon King Chronicles series. If you love Asian-inspired books or if you loved the author's first book, Prophecy, then be sure to not miss out on this one awesome book this December or better yet preorder this book for Christmas time!