A Witch in Love by Ruth Warburton 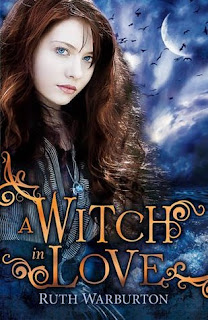 
Anna still finds it hard to believe that Seth loves her and has vowed to suppress her powers, no matter what.

But magic - like love - is uncontrollable. It spills out with terrible consequences, and soon, Anna is being hunted.


A WITCH IN LOVE picks up six months after the first book finished off from where two teenagers, Anna and Seth, were being very much in love and trying to be a normal couple as much as possible. Now from the previous installment, A Witch in Winter, readers were introduced to the main heroine, Anna, a young girl who discovers that she is a witch after performing a love charm on one of the most popular boys at her new local high school, only she never ever expected that it might actually work. In this sequel, the love spell of course eventually wears off and despite Anna's hesitation in starting a relationship with Seth, someone who claimed to love Anna for real this time, Anna cannot help but think that he's only there because of some residual effect left after the spell was broken. But when there's more romantic dilemma on the horizon and with possible dangers coming after all witches - with Anna herself included, she will need to do whatever it takes to save others and herself . . . before it is all too late.

I absolutely loved Ruth Warburton's debut novel, A Witch in Winter, and I couldn't wait to get my hands on the sequel because it was SO good. With that being said, I really enjoyed this sequel as well since it followed quite a similar style in pacing and the storyline like from the first book and the characters were even more lovable this time round than I've read previously from them. I guess what I admired most about this sequel was how everything was handled well by the author. Honestly . . . there was a lot going on with Anna and her friends, and Anna and Seth which includes the highs and lows of their new romantic relationship, and I think when you combine all of those crazy events with even more witchy problems, I think all in all Warburton writes brilliantly and flawlessly, and makes things really interesting for the reader!

For our returning characters, I continued to love every single of them and probably a little more in this sequel than from the first book. Now while I thought the supporting characters were super funny and super interesting as well in this sequel (and not to mention super helpful for our main heroine), but I thought our main characters were the ones who obviously stood out from the rest and were continually growing more into themselves and came out wonderfully. Anna for once, our main heroine, was someone I really liked from the first book and I still continue like her. She's stronger, she's more feisty, and as we learn more about her background and of the mother who'd abandoned her and her father long ago, we also get to see more of her confidence rise which was really great to witness. And as for Seth, the love interest of Anna's, he was yet another great character who grew some more as well. Unlike the love-sick puppy we saw Seth to be like (you know, after the love spell he was under and all from the first book), Seth has now come into his own character and he actually blew me away with his bravery and the way he continued to support Anna through . . . well everything difficult, especially when it came to dealing with her out-of-control powers. I just loved that about him. And relationship-wise . . . Seth and Anna were perfect together . . . even if Seth was more enthusiastic about their relationship than Anna was. But she still has good reasons to be hesitant about it which leaves their 'relationship' on the balance . . . you know, not knowing which side may fall.

Overall, both character-driven and with a lot of crazy stuff going on, A WITCH IN LOVE is another great installment to this series with plenty of drama, romance, and witchy history to get you invested with this storyline. While I will admit that I preferred the first book compared to this sequel, however there is much to love about this second installment and I'll definitely be looking forward to the third and final book next year considering how things ended in this sequel . . . oh my, THAT ending!