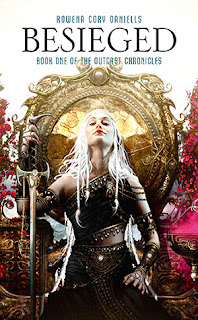 
Sorne, the estranged son of a King on the verge of madness, is being raised as a weapon to wield against the mystical Wyrds. Half a continent away, his father is planning to lay siege to the Celestial City, the home of the T'En, whose wyrd blood the mundane population have come to despise. Within the City, Imoshen, the only mystic to be raised by men, is desperately trying to hold her people together. A generations long feud between the men of the Brotherhoods and the women of the sacred Sisterhoods is about to come to a head.

With war without and war within, can an entire race survive the hatred of a nation?

Rowena Cory Daniells, the creator of the bestselling Chronicles of King Rolen's Kin, brings you a stunning new fantasy epic, stepped in magic and forged in war.

From the very beginning of the book, the author, Rowena Cory Daniells, creates a very complex world for her multi-layered and well-plotted society - one that contains many different races - where it's up to you as a reader to figure out how to put all of the many pieces together and understand what each of the characters are trying to achieve in their own journeys within the book.

Being a first time reader of the author's work, I have to say she certainly knows her own world from the inside out and has put a lot of great detail into the book - not to mention great effort into her work, making me very intrigued by her newest book. But with that being said, this book may not be for everyone's taste. Really, it wouldn't be for everyone. While I'm a hardcore fan of epic fantasy and the complicated worlds the author's always create in that genre, however I was still pretty disappointed in this book. It was intriguing like I said before but . . . it lacked a certain depth in character development for me and if I cannot connect to the characters, no less be able to connect with at least one them, then the book fails to capture my full attention and in this case it makes me lack a connection to the overall book itself.

The main issue I had with BESIEGED was not of the world because it was honestly really beautifully written but it had more to do with the different character perspectives we are introduced to. I don't mind a few perspectives just as long as they have some meaning to the storyline like my other favourite series A Game of Thrones, but for this book in particular I found it was way too distracting and too disjointed for my own taste when it came to the characters since I just wanted a 'story' and not to continue being confused by who's who and what exactly each character was wanting to progress towards, you know? The book was good in an average fantasy read kind of way but it was pushing towards too much information, so whether you're into that sort of thing or not, this book may not be the right book for you.

Overall, Rowena Cory Daniells still does a splendid job in making her readers work to understand this book of hers and I applaud her for writing so many crazy but beautiful things all into one action-packed book. It takes a lot of work to do all of that by the looks of her writing. So if you're a big fan of Game of Thrones or a fan of pretty much anything with some interesting fantasy elements in it, then this book will definitely work for you! As for me, it may not have totally blown my mind but it was something I had the pleasure to read and I hope anyone who chooses to read this book enjoys it more than I did!