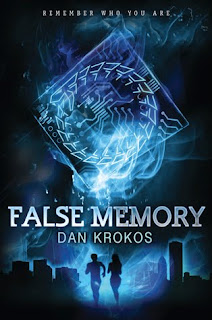 
Miranda wakes up alone on a park bench with no memory. In her panic, she releases a mysterious energy that incites pure terror in everyone around her. Except Peter, a boy who isn't at all surprised by Miranda's shocking ability.


Left with no choice but to trust this stranger, Miranda discovers she was trained to be a weapon and is part of an elite force of genetically-altered teens who possess flawless combat skills and powers strong enough to destroy a city. But adjusting to her old life isn't easy - especially with Noah, the boyfriend she can't remember loving. Then Miranda uncovers a dark truth that sets her team on the run. Suddenly her past doesn't seem to matter . . . when there may not be a future.


Dan Krokos' debut is a tour-de-force of non-stop action that will leave readers begging for the next book in this bold and powerful new series.

Entertaining, refreshing and equally as engaging as I thought it would be, Dan Krokos's debut book, FALSE MEMORY, refuses to let go of your full attention and manages to capture - no wait scratch that, mess with your head countless of times before you can say, 'No way did that just happen!!!'. No really, that is what happened to me with this book.

FALSE MEMORY was a book I just HAD to read this year! While some readers believe and may argue that with characters losing their memories is somewhat too 'cliche' and 'not unique at all' in the YA genre, but when it comes to this book alone I thought the author dealt with it in a way that made the story really interesting and stand on its own, especially with the character's dark pasts to back it all up. Throughout the main character's journey, Miranda's that is, we slowly begin to unravel her memories and engage with a variety of characters to help regain those lost memories of hers - the good and the bad ones.

Regardless of the amazing storyline, I think the best thing this book had to offer was its characters and the vast differences they displayed throughout many of the book's events. Miranda for one, our resourceful and ready-for-action main heroine, was someone that may have her faults but she continued to use those for her own advantage to control any given situation thrown at her and I love how she does that . . . to be so strong and independent even when her memory has not been present for the majority of the book. I won't spoil too much about the characters for you as some should be kept as a little surprise for those choosing to read this book, but I will say there's a love triangle but it's not one you will be expecting.

As for the boys, Noah was an okay character and I could see the small connection he still had with Miranda because you see he is technically her 'boyfriend' from her past but she can't exactly remember him because this certain thing happened and she could sort of remember him but . . . yeah, it's really complicated. Noah wasn't a wowing character for me but trust me he definitely plays a very important role in discovering what happened to Miranda, so you're going to enjoy his story. Then on the other hand we have the boy named Peter and he was honestly my favourite character of all of the cast! A total sweetheart and totally there for everybody needing his help, Peter is the kind of guy you can't help but fall for and while I can't spoil little things about him and of his past with Miranda, but . . . you're going to love the attraction he and Miranda form in the book. It. Is. So. Sweet. Complicated for sure but ultimately . . . very sweet.

Overall, despite what some critics say about this book, I thought Dan Krokos's did a splendid job with his debut book and I loved every moment of it. With lovely and powerful hints of sci-fi, thriller and some pretty awesome action-packed performances from some pretty awesome characters, if you love the kind of books from James Patterson's Maximum Ride series or the likes of The Bourne Identity series, then prepare yourselves readers because this debut will really hook you in before you even know it!