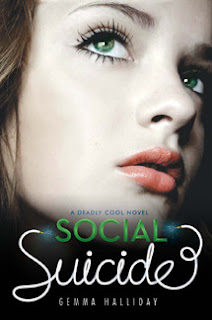 
Twittercide: the killing of one human being by another while the victim is in the act of tweeting.

Call me crazy, but I figured writing for the "Herbert Hoover High Homepage" would be a pretty sweet gig. Pad the resume for college applications, get a first look at the gossip column, spend some time ogling the paper's brooding bad-boy editor, Chase Erikson. But on my first big story, things went . . . a little south. What should have been a normal interview with Sydney Sanders turned into me discovering the homecoming queen-hopeful dead in her pool. Electrocuted while Tweeting. Now, in addition to developing a reputation as HHH's resident body finder, I'm stuck trying to prove that Sydney's death wasn't suicide.

I'm starting to long for the days when my biggest worry was whether the cafeteria was serving pizza sticks or Tuesday Tacos . . . .


In lines with Nancy Drew and Veronica Mars, Gemma Halliday's debut novel Deadly Cool was such a super fun, exciting, fast-paced and a very entertaining first installment in the Hartley Featherstone series, and I was so pleased to find out that the sequel, SOCIAL SUICIDE, followed in the exact same way only . . . it was so much better and if not far stronger than its predecessor!

With a similar storyline as the first book, the sequel SOCIAL SUICIDE once again has Hartley Featherstone caught up in more mysteries as she continues to investigate the most shocking crimes of her town, ones that seems to follow her everywhere she goes. Only this time round, Hartley is now a member of her online high school paper and it's her job to hunt down upcoming stories along with her hottie editor and local bad boy, Chase, who always keeps her on her toes. The guy she'd shared a kiss with from the previous book. So when she catches wind of a cheating scandal with the students at her local high school, Hartley is quickly on the case and just when she's about to talk to one of the girls suspended for this suppose 'cheating', unfortunately . . . this girl named Sydney is found dead in her pool. Death by twittercide as they call it. But as clues begin to pile up one after the other and when Sydney's death is more than just the apparent 'suicide', it's up to Hartley and her friends to find out what really happened before the killer comes after Hartley next!

Hartley remains to be a favourite character of mine. She might not be the brightest one out of the bunch, as she can allow her imagination to get away with her at times and she can also be a little bit naive, but she's beyond smart and not to mention hilarious, and I always find myself tearing up in laughter at every joke she seems to make! Seriously her snark and her wit is just . . . awesome! I love her for it! But in comparison to her and her best friend, Sam, together these two BFFs are the perfect best friend combination for a mystery story such as this one. Sam, much like Hartley, is a real force to be reckoned with and even for a supporting character with only a small part to play in the book, I have to say I'm always looking forward to the next funny one-liner she throws at you because Sam is really hilarious! I guess in some way she brings out the best in Hartley and it makes me appreciate these characters a little more because of that.

But what I also appreciated in this sequel was how the romance played out between Hartley and Chase, one that was hinted throughout the first book Deadly Cool. From the very beginning I adored Chase with his good-and-bad boy routine, and I knew instantly that some romance was bound to happen with these two main characters. So just as I expected, it was going to happen soon. Though what did surprise me with this sequel was how this romantic relationship didn't occur all so heavily as of yet, as this relationship is still taking its time and after all . . . it's still at this very awkward of sometimes-friends-but-sometimes-spark stage between these two characters, which I guess is a great way for the author to make us readers believe in this actual relationship a lot more and want to go cheer for it in upcoming books! So whether or not Hartley and Chase finally get their act together and date . . . guess you will have to read and find out for yourself, right?

Overall, SOCIAL SUICIDE was totally predictable in terms of 'who is the killer' but regardless of that part, I didn't care whatsoever! I thought the first installment was such a brilliant concept and this sequel continues to be just as brilliant what with some wonderful dark and daring twists, along with just the right amount of danger to get me gearing up in excitement for more and more books of this YA thriller-mystery series. So watch out Nancy Drew and Veronica Mars because Hartley Featherstone is on the loose and is about to steal your case as we speak!