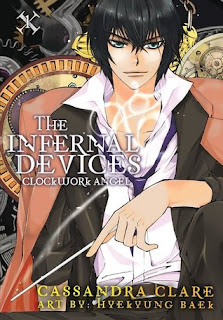 A manga-adaption to the prequel of Cassandra Clare's Mortal Instruments series, The Infernal Devices is the story of Tessa Gray, a sixteen-year-old American girl traveling alone to Victorian London who runs afoul of the city's sordid supernatural underworld. Rescued by the Shadowhunters of the London Institute, Tessa quickly finds herself caught up in an intrigue that may very well destroy her new friends - including the two enigmatic young men, Jem and Will, who have taken her under their wing . . .


The first book of The Infernal Devices series, Clockwork Angel, was - and still is - my favourite book of  all time from the bestselling author, Cassandra Clare, and I'm so obsessed with it more so than with her other young adult series, The Mortal Instruments, which is also another very popular series among her readers. So with me also having a hardcore love of manga books as well (a bonus on my part) and having two of my favourite things combined into one very neat and beautiful package, it was pretty much a match made in heaven for me and this book and oh indeed it was!

With the manga's plot being much the same as the original book, I really having nothing bad to say about this manga version other than a few of the characters not exactly looking themselves from the ones lurking inside my head. But with that being said, Hyekyung Baek is one of the most brilliant illustrators that I've ever come across so far and if you have seen her previous work you will know why she is one of the greatest out there in the business. Her work is just . . . beautiful. Intricately drawn, greatly detailed and simply wowing to the human eye (I exaggerate I know haha), I'm super glad the artist managed to capture and keep everything I love from the original work into this much smaller, new masterpiece and there were plenty of times in the book that made me swoon because I finally got to see my characters coming to life onto the page with you know . . . not having to make them up in my head. I just LOVED every moment of it!

Now in regards to how the boys were drawn in this particular book, they very much reminded me of the two main lead boy characters from one of my favourite manga series Vampire Knight, and you know who I'm talking about here: the Will and the Jem, Tessa's two handsome and charming love interests who cause all sorts of heartbreak to their readers. At first I was worried when I heard about a manga version of the series being created because I was wondering how on earth the illustrator would capture the likeness of Will and Jem and the ones inside my head, but I worried not more once I saw the two beautiful boys . . . they were just again beautiful. *Le sigh* Words can't describe how gorgeous they look on the black-and-white paper . . . but oh dear lord I simply couldn't get enough of them on the pages! And as for Tessa, she was very beautifully drawn as well but as for Henry's character . . . what on earth have they done to him? Poor fellow. He deserved better facial features. But let's get back to the boys and think about them some more . . . *Le sigh*

Overall, the manga version of CLOCKWORK ANGEL was beyond beautiful - both in storytelling and making the characters I know and love come to life! If you're already a fan of this wonderful series or just have a love of Cassandra Clare in general, this manga version of her book will be the perfect addition to your book collection and right now I'm already gearing up to buy the next manga installment of Clockwork Prince which means more Tessa, more Will, and most importantly . . . more Jem which is a fairly good deal for me!