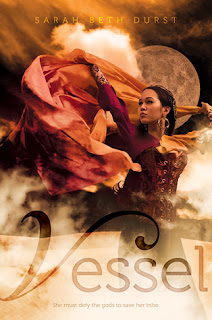 
In a desert world of sandstorms and sand-wolves, a teen girl must defy the gods to save her tribe in this mystical, atmospheric tale from the author of Drink, Slay, Love.

Liyana has trained her entire life to be the vessel of a goddess. The goddess will inhabit Liyana's body and use magic to bring rain to the desert. But Liyana's goddess never comes. Abandoned by her angry tribe, Liyana expects to die in the desert. Until a boy walks out of the dust in search of her.

Korbyn is a god inside his vessel, and a trickster god at that. He tells her Liyana that five other gods are missing, and they set off across the desert in search of the other vessels. For the desert tribes cannot survive without the magic of their gods. But the journey is dangerous, even with a god's help. And not everyone is willing to believe the trickster god's tale.

The closer she grows to Korbyn, the less Liyana wants to disappear to make way for her goddess. But she has no choice: She must die for her tribe to live. Unless the trickster god can help her to trick fate - or a human girl can muster some magic of her own.


Gods and goddesses, deserts and droughts, love and friendship, fate and freedom. Sarah Beth Durst's newest book release VESSEL had me before the opening of the book's dust jacket. Both engaging and richly detailed in every single aspect of the fantasy genre (which, by the way, this book totally nailed in), never have I read such a beautiful book before and it's no wonder why so many readers have fallen in love with this particular story and with the author herself, because really . . . it was one of the most amazing things I've read this year and it most certainly won't be the last I read of Sarah Beth Durst's work. Just whoa.

Firstly the world-building was just phenomenal! There's no doubt in my mind that the author had taken a lot of her time in creating such a vastly impressive world, and in doing so, she had managed to capture my full attention from beginning to end, enabling all of my own senses as I had immersed myself with this world before I'd even became aware of it. I could literally feel the dusty winds and the blistering heat upon my skin, and taste the sands of the deserts . . . it was beyond amazing and something totally unique within its own genre.

Now right when I had the pleasure of first meeting the main character of this story, Liyana, this brave and very stubborn girl walking this dangerous journey of the impossible, I had absolutely fallen in love with her character and the world she lived in. Liyana for me - from her loyalty to the faith she held for her own people, to her never-ending longing of freedom, and to her values of her own beliefs - was truly inspiring in every action and motive she had when completing her journey in finding her goddess. I just loved her to bits! Not because she was an amazing character, but it had more to do with her true human nature (this amazing side to her personality) and I found her interesting in every way possible because of that!

Concerning the love interests of the story, I found they didn't overtake the plot whatsoever nor made it feel slowed down nor boring. Instead, it made the book even more believable, not to mention it made my own heart ache for our own main character, Liyana, and her conflicting feelings towards the men in her life. But with that being said, considering the ending we received and this somewhat very emotional epilogue, while I can't quite understand how I actually felt about that ending matter, but I still firmly believe it ended  in a natural and complete sort of way, giving it a nice and simply blissful ending. But on the other hand, I also felt sad in the way it ended too. In the beginning I had predicted what could happen towards the end, though I didn't really want it to end in the way. Regardless, I was close to tears at the very end and I hope many others who have the opportunity to read this book will truly come to appreciate it because it was so damn beautiful and emotional!

Overall, VESSEL deserves every single praise it has been receiving lately! Reminding me of the essences of Leigh Bardugo's Shadow and Bone and Colleen Houck Tiger's Curse series, I'm truly . . .  well . . . gleeful in having read this wonderful book and I can't wait to read more of Durst's work in the future. She's a true genius in storytelling by what I've just read!