Kiss of Steel by Bec McMaster 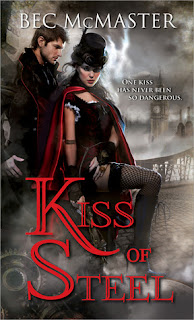 
Honoria Todd has no choice. Only in the dreaded Whitechapel district can she escape the long reach of the Duke of Vickers. But seeking refuge there will put her straight into the hands of Blade, legendary master of the rookeries. No one would dare cross him, but what price would he demand to keep her safe?

Ever since Vickers infected him with the craving, Blade has been quicker, stronger, almost immortal - and terrified of losing control of the monster within. Honoria could be his perfect revenge against the duke . . . or the salvation he never dared to dream of.

What else can I say except that I just adore steampunk and boy how I missed reading it! In Bec McMaster's debut adult book, KISS OF STEEL, the first installment of the London Steampunk series, it really packs in a punch with some delicious Victorian-like elements, some really bossy characters, some steamy romances, some criminal escapades, some intriguing paranormal circumstances, and not to mention it has a slight hint of mystery in it as well, creating a pretty awesome book in the end and one I adore just as much as I adore the steampunk genre within itself. Again, what can I say? It was pretty awesome indeed.

Right from the start I loved Honoria as a main heroine. While I must confess that I may have laughed at her own name from time to time, especially whenever I said it out loud or in my head, but I loved her regardless. She was feisty  she was passionate, she was headstrong in any sort of situation she faced - criminal or not - and she did deal a pretty hard bargain (no matter its price) to not only look after herself but her family also, and I loved how she was so family-oriented in that way. It was pretty special. I cannot say a single bad thing about her to be honest with you, other than she so damn stubborn! As for her leading man, Blade, a man reminding me so much of Jeaniene Frost's Bones from the Night Huntress series, I have to admit he was a pretty hot character. With his charm, protective-nature and his choppy ways of speaking, Blade is someone you would definitely want on your good side and if you're loved by him, you will pretty much be taken really good care of by him . . . so prepare yourself ladies, he is a keeper in my books!

Story-wise, I thought everything was wonderfully written and there was not one moment where I could honestly say that I had found myself bored because really it was an addictive read and I just wanted to KNOW what was going to happen next to our two favourite main heroes, so I say way a go Bec McMaster for creating such a great paranormal read. Even though vampires may have been cold and dusted a long time ago in any sort of fiction, but McMaster has managed to approach vampires in an interesting way and whether it's going to be a trilogy or have even more books in the series, I still can't wait dive back into another one of McMaster's books. Trust me it was THAT enjoyable!

Overall, if you're a super duper fan of Jeaniene Frost, Rachel Vincent or of Kristen Callihan's work, then KISS OF STEEL will certainly be your kind of read!