Bared to You by Sylvia Day 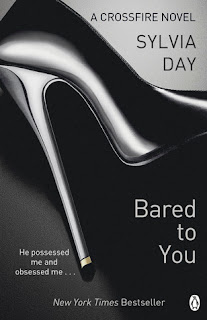 
Our journey began in fire...
Gideon Cross came into my life like lightning in the darkness—beautiful and brilliant, jagged and white-hot. I was drawn to him as I'd never been to anything or anyone in my life. I craved his touch like a drug, even knowing it would weaken me. I was flawed and damaged, and he opened those cracks in me so easily . . .Gideon knew. He had demons of his own. And we would become the mirrors that reflected each other's most private wounds . . . and desires.The bonds of his love transformed me, even as I prayed that the torment of our pasts didn't tear us apart . . .


I have avoided Fifty Shades of Grey for all good reasons (and I will continue to do so), but after reading some small samples of the book and reading some interesting reviews on it, from what I can tell the book is clearly and completely unbelievable (though I do have a lot of great respect for the author because she's making millions out of a book trilogy and good for her for that!). But regarding this book in particular, BARED TO YOU, while the erotica genre is only for those of a strong heart (yes I just said that) but surprisingly this is one of the most addictive reads I've ever read last year and I'm so glad many people recommended it to me because I oddly . . . LOVED it!

Blowing the Fifty Shades craze out of the water, BARED TO YOU puts together a crazy-beautiful-but-simple idea and creates something where I don't actually cringe at (finally!) but rather be entertained by and being able to immerse myself with the book rather than turn away from it. Now from what I understand about Fifty Shades of Grey and the samples I've read of it a long time ago, it dealt with a lot of sexual things (things that were way too much for my own taste and things that were pretty disgusting but whatever floats your boat I guess) but with BARED TO YOU there is a vast improvement where sex isn't being entirely used as dominance and not being constantly used in an unhealthy way either to influence the main character's actions . .  . so I'm happy about that certain aspect. But the thing I liked most about BARED TO YOU is the fact that I could actually connect with the characters on an intimate level and I so wanted them to triumph too.

Eva, our main protagonist, was someone so strong and powerful to me. She had a voice of reason than a voice of stupidity, which I have seen from many erotica books in the past, especially from what I've read and heard about Fifty Shades of Grey's main character. Sure, Eva gives into a lot of demands from her love interest, Gideon Cross, but she doesn't allow anyone to push her over and she doesn't like being told what to do nor be scolded in who she should see outside of the workplace, and based on what I've read of her, she certainly let's everyone know if they are doing that to her and tells them off straight away and I loved every single moment of it. She was awesome - very tortured perhaps - but awesome.

As for Gideon Cross, the powerful man with a lot of money hanging off his back pocket, he was also someone very tortured and even though he got on my nerves at times but . . . I really loved him. He's not what every girl should be looking for in a man but being an interesting character I shall overlook that fact. Gideon Cross is a hard character to describe and for all those thinking he'll be another Christian Gray . . . well, I suggest you re-think that again because he's not Gray whatsoever. He's not sick, not abusive, and most importantly he's not one to force things onto a woman . . . especially Eva. Even though argument after argument leads to more sex and yet more sex yet again, but I think despite their complicated bull-crap I actually thought Gideon and Eva were so perfectly matched together and complemented one another. There's really not much else to say except that they are perfect together and not to mention so magnetic.

Overall, BARED TO YOU actually has a storyline compared to Fifty Shades of Gray and sooooooo much better written in many different ways. Splendid in character development, engaging in storytelling, and with large, sexy sparks coming right off the pages in all of the right places, BARED TO YOU is definitely something that should be on your to-read list soon because it was . . . brilliant!