Don't Turn Around by Michelle Gagnon 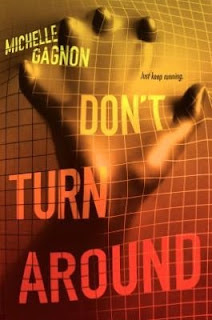 Sixteen-year-old Noa has been a victim of the system ever since her parents died. Now living off the grid and trusting no one, she uses her computer-hacking skills to stay safely anonymous and alone. But when she wakes up on a table in an empty warehouse with an IV in her arm and no memory of how she got there, Noa starts to wish she had someone on her side.
Enter Peter Gregory. A rich kid and the leader of a hacker alliance, Peter needs people with Noa's talents on his team. Especially after a shady corporation called AMRF threatens his life in no uncertain terms.
But what Noa and Peter don't realize is that Noa holds the key to a terrible secret, and there are those who'd stop at nothing to silence her for good.
Fans of "The Girl with the Dragon Tattoo" will devour the story of Noa, a teen soul mate to Lisbeth Salander.


Dubbed as being the teen version of The Girl with the Dragon Tattoo (one of my absolute favourite adult trilogies and movies too), I SO wanted to read DON'T TURN AROUND for many, many different reasons. But for the most part, I just wanted to read this book because I already had this strange fascination with the hacking world of today's society and how they plan to take down certain governments and learn of conspiracy secrets between those governments and such, so I simply couldn't resist in reading this book, especially after reading many raving reviews for it and on every level possible it certainly delivered. Action-packed scenes, interesting characters, and you know . . . regular teen hacker norms you name it! It has it all!

In the story of DON'T TURN AROUND, the book is told between two main characters, Noa and Peter. Noa is your not so average girl who'd hacked herself out a new life, freeing herself from the foster care homes where she had originally came from. But Noa is still on the run from some very bad people after she'd woken up on a medical table but more on that shall be revealed when you actually read the book. Peter, however, is a kid from a very wealthy family and both of his parents are corrupt in well . . . something but he also happens to be the leader of a hacking group online called the Alliance, and together when these two main characters cross paths that's when all of the trouble slowly begins . . . following very closely behind them.

Now what I loved about this book was the characters, Noa and Peter, who are at opposite ends of each other and yet share this very intense passion for hacking and not allowing people to corrupt others. I really loved that about them. For Noa's character, I really clicked with her from the get-go because she immediately reminded me of Lisbeth Salander from The Girl with the Dragon Tattoo series, and even if she wasn't as badass like Lisbeth clearly is (okay so I have a girl crush on Lisbeth and no one can measure up, so what?!) but Noa's reputation certainly precedes her. Smart and resourceful, witty and courageous and clearly handy with her hacking computer skills with her Macbook Pro, Noa is someone who keeps fighting back and I enjoyed reading about her character immensely, especially getting an inside take on the foster care system which I think is still bad even today. For Peter's character on the other hand, he was a fairly easy character to like. On a whole I think he was great company for Noa's hardened personality and he really brought out some good in her in the book - even after a short time of knowing each other - so it'll be interesting whether something more develops between the two of them in the future sequels. Now as for Peter's girlfriend-but-sort-of-ex-girlfriend-now, Amanda, I'm unsure about her . . . I didn't like her short perspectives in the book nor did I see the point of them either. She was just such a bore but GO Noa and Peter! They rocked!

Storywise, I thought everything was brilliantly written. Sure the story resembled bits and pieces of my favourite heroine's story Lisbeth Salander's from The Girl with the Dragon Tattoo series (only a 'little bit' though), and even if the story wasn't as believable and lacked a romance that I was sort of hoping for (though there is a possible romance in future sequels at least I hope there is), but I do LOVE how I still have so many questions about the book and the direction it's heading towards. It really captured my attention and if only the sequel would bloody hurry up already! I need to read it!

Overall, I loved this book and it was everything I was expecting it to be. While DON'T TURN AROUND didn't exactly leave a major cliffhanger at the end, but the ending was enough to get me wanting the next sequel and eagerly wanting to reread this awesome book. So if you're in love with hacker stories, great narrators and some pretty high intensity scenes then I would highly recommend this book to you. And if you also happen to love The Girl with the Dragon Tattoo trilogy like I do very much, then look no further for the teen version of that series because it was just as good!