The Darkest Minds by Alexandra Bracken 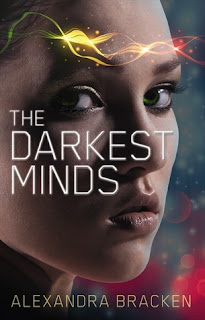 When Ruby woke up on her tenth birthday, something about her had changed. Something frightening enough to make her parents lock her in the garage and call the police. Something that got her sent to Thurmond, a government ′rehabilitation camp′. Ruby might have survived the mysterious disease that killed most of America′s children, but she and the others had emerged with something far worse: frightening abilities they could not control. Now sixteen, Ruby is one of the dangerous ones.When the truth comes out, Ruby barely escapes Thurmond with her life. Now on the run, she is desperate to find East River, the only safe haven left for kids like her, and she joins a group of other runaways who have escaped their own camps. Liam, their brave leader, is falling for Ruby, but she can′t risk getting close. Not after what happened to her parents.When they arrive at East River, nothing is as it seems, least of all Liam. But there are also other forces at work, people who will stop at nothing to use Ruby in their fight against the government. Ruby will be faced with a terrible choice - and one that may mean giving up her only chance at having a life worth living.


A big thanks to the publisher on netGalley for accepting my request in reading this book early!

A few years back I read Alexandra Bracken's debut novel Brightly Woven and I absolutely loved it, and now with her second title, THE DARKEST MINDS, it most definitely offers up an exciting start to a trilogy and one I can see growing very popular for younger readers!

Apart from the addictive storytelling and some very intense situations, I think what had really won me over with this book was the characters and how they all fitted into this one storyline. Ruby, the main heroine, was a very likable character and was easily a person I could relate with. At first Ruby seemed like a trapped animal longing for an escape elsewhere, but once she breaks out of her shell and interacts with a group of others that share something in common with her, this reclusive young Ruby begins to fight back for her own freedom and with that her inner strength, courage, and urge to survive . . . it really shines out in the most brilliant way possible! Even the supportive characters fighting alongside Ruby were just as fantastic as she is and grows within their own time, so I really enjoyed every single character in the book, really.

Regarding the romance of this book, there isn't a terrible lot of romance which is to be expected since this book mostly focuses on the dystopian side of things and how Governments continue to control us by using others as weapons and such. I mean after all, this particular story is pretty terrifying so it's quite understandable why there is a very subtle romance in the book, so it's okay by me for that main reason. But despite this 'subtle romance', well . . . I'm still reasonably pleased by Ruby's main love interest and how this certain 'he' fits into the picture of all things. So be sure to be on the lookout for that romance as it's bittersweet and definitely worth the wait!

Overall, THE DARKEST MINDS sets up a fantastic start to a YA trilogy. Containing all of the right elements including action-oriented sequences, an intriguing set of characters and some pretty cool superpowers that all readers will love to have themselves, I'm sure many will be dying to read this book. While this title wasn't as epic as I imagined it to be, but I'm still super excited to get my hands on book two considering the OH-MY-GOD-SO-CRUEL of a cliffhanger! Seriously though, the cliffhanger was the cruelest thing in this entire book and I'm not quite so forgiving at this time so stay tuned when I get its sequel!