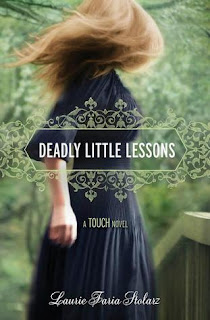 Camelia Hammond's trying junior year of high school is finally over...but her troubles aren't. After she discovers a painful truth about her family, she escapes to a summer arts program in Rhode Island. Determined to put family - and boyfriend - drama behind her, she throws herself into her artwork.

At the arts school, she gets caught up in the case of Sasha Beckerman, a local girl who is missing. Even though all signs suggest that the teen ran away, Camelia senses otherwise. Eager to help the girl, she launches her own investigation. She finds a blog by someone named Neal Moche, a psychometric who might have clues to Sasha's whereabouts. There is something familiar about Neal, and Camelia realizes how much she misses Ben, despite being committed to Adam.

But time is running out for Sasha, and Camelia will have to trust her powers if she's to save her. Will the lessons Camelia has learned in the past give her the strength to do so?


Right from the very beginning I had loved this series - from the smallest of romances to the utter suspense of the mysterious storylines, I just loved this series because I'm such a sucker for any sort of thriller and mysteries types of stories. But, like with some other readers, I had also experienced some ups and downs with this series as well and had found the story to be too predictable at times. Regardless, I still found the fifth and final installment of the Touch series, DEADLY LITTLE LESSONS, to be by far my favourite of the entire book series and I'm glad I felt this way as it is sad - yet again - to say goodbye to another favourite series of mine!

DEADLY LITTLE LESSONS is equally intriguing as its previous installments, only this time round it had really laid down all of the cards onto the table. It really did. Not to mention the romance finally takes a primary focus of the book, which was great to read about as well as I've been longing for the romance to take control and play an important part to the story - not just come and go as its pleases. But as for those fans of the series who really needed a conclusion to the whole romance aspect of the storyline, we also finally get to see the actual conclusion between the whole Ben-Camelia-Adam love triangle saga and I'm sure many readers will be pleased by its ending to that saga . . . I certainly was because I literally kept going back and forth between both of the boys and it was really hard and hurtful for my shipper heart, okay? Hehe. But trust me here . . . you're going to love the final conclusion to it all.

Regarding the characters I thought each one of them - from the main characters to the supporting ones - had really shined in this book, more so than in the previous installments which was great because each of the characters have their own quirks and ones I admire them for individually. Sure when it comes to this book neither character was entirely perfect and the story may have been a little predictable in terms of what each character's own actions were going to be like, but I loved the characters back in the previous books and I still continued to love them in this final book as well.

Camelia for one, the main character, was someone that really improved for me in this particular book and as we finally get to know more about her past and what secrets have been kept for her for so long, I had actually formed some great respect for her and I loved the way she handled things (all the complications in her life) . . . even when she made a few mistakes too. But the shining star for me was Ben, one of her two love interests. Now for once, Ben finally got some of the spotlight and boy did I miss his character on the page. Honestly, even when some readers found him too creepy and too bad-boy-ish for his own good, but I've always loved Ben's character as he has always played a prominent role in this book series and despite his stubbornness in loving our Camelia . . . again I just love him to bits and wait until you read this book because he's amazing in it! I mean seriously . . . he and Camelia are just meant to be. Sorry Adam! I did love you once but you disappointed me way too much in this book.

Overall, DEADLY LITTLE LESSONS was exactly what I needed in this final installment of the Touch series and while it may have needed more oomph in the storyline, but I can't really complain here because I really enjoyed book in the end and I'm really sad to see all of the story - the mysteries and the heartache of Camelia's life - come to a beautiful end.