The Blessed by Tonya Hurley 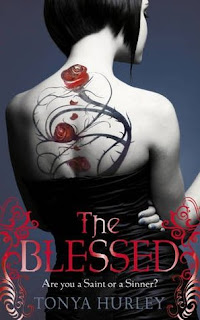 
Brooklyn teens Lucy, Cecilia and Agnes find themselves in the emergency room at Perpetual Help Hospital at the lowest point in their lives. Lucy, the superficial party girl; Cecelia, a drop out rock chick; and Agnes, a hopeless romantic. All rebels running from their lives and themselves, plagued by broken hearts and broken dreams. Enter Sebastian. Mysterious, compelling, seductive. He seems to bring each of them what they long for . . .


But in the battle for his heart, will they lose their souls?

THE BLESSED tells the tale of three girls leading three very different lives and whom are brought together in a Catholic hospital - all because they had experienced one of the most lowest points in their lives. Agnes, a romantic at heart type of girl, had just tried to commit suicide, Cecilia, a self-made socialite and the next 'IT' girl, was found face down in water and almost drowned, and then there's Lucy, a runaway teen but a very talented and young musician, who was found highly intoxicated. But just when things slowly begin to unravel themselves . . . everything changes when they meet a handsome and a very peculiar stranger, a boy named Sebastian, who gives them each a bracelet, leading to these three girls believing that they are the reincarnations of the saints of Agnes, Cecilia and Lucy. Question is . . . Is he telling the truth?

Here's the thing about this book: I thought the concept of the storyline had an interesting direction going for it and it did seem pretty unique too compared to the many other YA books out there. Having read one of Tonya Hurley's previous works, a book from her young adult Ghostgirl series, I thought she could pull it all off somehow with this storyline but unfortunately for my own excitement and unfortunately for this author - whether this is by unpopular opinion or not - this book was one of the most bizarre books I have ever read and one of the most disappointing ones as well. As much as I hate giving low-star reviews and while I do try to point out some great parts in a book, however I just didn't like this book at all and I couldn't appeal to any of it either. It was just weird, strange and confusing.

Even with some interesting information about saints here and there, but it was the characters more than anything else that had continued to push me further and further away from the boo itself. Agnes, Cecilia and Lucy are characters you're either going to love or hate and while Agnes was the only real girl I 'didn't mind' for a minute or two, but as for the rest of them . . . they just fell flat for me all the way through the book because they weren't believable enough and were just a huge mess to begin with  I mean, the main and crucial element that is to blame for all of this lack of connection to the book was by having the three perspectives told from all of these three girls - it all clashed together, you know? Perhaps if it was told by one of the girls instead of all three, maybe I would've liked this book more but what's done is done and sadly there's nothing much left to be said regarding the characters.

Another element that surprised me was the violence towards the end of the book. These three girls who are supposedly 'saints' suddenly went over the edge and became extremely violent. I was left thinking, "Really? Is that even possible?". Obviously it was for them . . . so if you end up reading this book you will know what I mean about the violence. I can take violence - I admit this - but I don't like violence if it suddenly came out of the blue and for no real reason whatsoever either . . . it just doesn't make sense to me.

Overall, THE BLESSED was something that didn't work for me. I honestly have no idea what else to say except that I still have no idea what I've just read. Other than its pretty pictures on the inside and its pretty book cover, if you happen to be a fan of something containing very strange circumstances and perhaps something with a little interesting twist to it, then I would definitely recommend this book to you! But as for me and what I'm going to do next, I'm going to stick with reading better things!