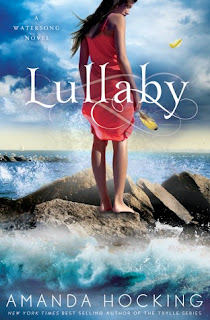 Harper only wanted a safe, normal life. But when her younger sister Gemma runs off with a dangerous clique of beautiful girls, Penn, Thea, and Lexi, everything changes. Vowing to get her sister back no matter what the cost, Harper must face dangers unlike any she's ever experienced. Fortunately, she has Daniel by her side, a gorgeous guy who's devoted to helping her find her sister—and who's immune to the girls' dark powers.

While Harper searches for her sister, Gemma struggles to adjust to her new life. Gemma's powers are growing by the day, and the longer she lives with her new "sisters," the harder it is to resist entering their magical world. It's a realm both dark and beautiful, and where she's plagued by strange hungers and unspeakable needs. Just as she's drifting far away from her old life, Harper and Daniel find her...but no one can deny how much she's changed. All she wants is to return to her family and the mortal world, but how can she do that when she's become something else entirely—and will they still love her once they learn the truth?

Prepare to fall under the spell of Lullaby, the second book in the Watersong series from New York Times bestselling author Amanda Hocking.

A big thanks to Macmillan for sending me a review copy of this book!


LULLABY is the second installment of the Watersong series. In Amanda Hocking's newest adventure, the story resumes from the end of the first book, Wake, where Harper attempts to deal with the aftermath of Gemma's attempt in running away with the monstrous siren creatures - the three girls Penn, Lexi and Thea - and how she desperately wants to come up with a plan on how to save her younger sister from becoming one of them. But with her relationship being constantly tested with Daniel, a boy she is slowly starting to fall for, and with her obsession in searching for her sister, there are still so many obstacles that she must go through before finding Gemma. And as for Gemma herself, the clock is ticking for her own human life as she is slowly becoming one of the Siren sisters. But when her new, violent nature begins to rise beneath the surface, she too must figure out a way to get away from the siren girls once and for all, and return home to her family and her boyfriend, Alex, who is the person - the only person - who can make her stay human.

Now I didn't mind the first book, Wake, but it wasn't necessarily a favourite book of mine from the author. But what had improved this time round in the sequel and what had made me like this story even more than the first was finally getting to know Harper as a main character (aside from her younger sister Gemma), a character who was an okay one for me in the previous book but wasn't exactly an engaging one for me at the time. Another thing that improved was seeing another side to Gemma and one away from her family and new boyfriend, and I must admit it was great seeing her new siren nature coming out to play . . . gotta love the evil natures of an innocent character who is slowly becomes well . . . nasty. I know I am cruel. And as for the sirens themselves. . . the SIRENS are just so awesome. Plain and simple. Awesome. Whether it's the mythology or the way they want to lure people into the kill, I love everything about them and they get even better in this installment and much crueler too, so I was very happy about that.

While I won't get into the major details especially with those readers who have yet to read the first book in the series, but I will say the ending to this particular book was a total killer! I mean, I totally saw it coming my way but it was a damn right KILLER I tell you! Overall, LULLABY was a major improvement to Wake and I'm now very excited to get my hands on the third book, Tidal, which I'm sure will bring everything out of the water once more so bring on more siren action for me please!