The Spider Goddess by Tara Moss 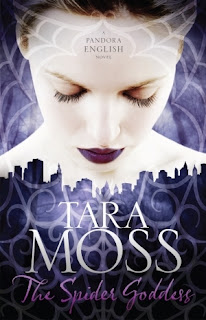 
It's been two months since Pandora English left her small hometown to live with her mysterious great-aunt in a haunted mansion in Spektor – the fog-wreathed suburb of Manhattan that doesn't appear on any map. With the help of her great-aunt and the beautiful – but dead – Lieutenant Luke, Pandora is beginning to understand the significance of the Lucasta family heritage her late mother kept secret from her. Pandora is heir to a great gift. And with that comes frightening responsibility . . .

Meanwhile, she seems doomed to be forever underestimated in the mortal world. Her fashion editor boss doesn't seem to know she exists. But New York needs Pandora's special gifts. There is a new designer in town, and her ambitions extend far beyond taking over the fashion world one knit at a time . . .


Having enjoyed the first book, The Blood Countess, I was really looking forward to seeing where the sequel would take us to next to. For the next book, THE SPIDER GODDESS, Tara Moss's second installment of her paranormal Pandora English series, it most certainly does not disappoint its readers. Highly engrossing, super fun, creepy and perfect for any paranormal fan out there, I think a lot of readers should consider reading this series because it's pretty awesome to put in one way!

I won't get into too much detail since I don't want to spoil the events that occurred in the first book, but the one thing that made me crawl was the spiders in this book . . . just like it was mentioned in the book title alone. Trust me, the descriptions of the spiders and how they were crawling on everybody in this book just had really freaked me out even though it's all fictional. I just hate spiders so it's a good job the main character, Pandora, is not afraid of them because I was. She's definitely braver than I am. But what I did love in this sequel this time round (apart from all those damn spiders) was how we learned much more about our main character and her family, it certainly does answer a few questions that I had from the first book.

Overall, THE SPIDER GODDESS was another great follow-up to the paranormal series of Tara Moss's and even though it is only part of a series I think this book can really stand alone just as well. Plotted with very strong female characters, interesting story turn-points, and some pretty cool mythology in the works, I'm sure many readers will enjoy this sequel as much as they enjoyed the first book in the series and I would definitely recommend it!